After an aggregate 1-0 win against Mali in the qualifiers, they were able to secure a spot with the other African teams for the 2022 World Cup in Qatar.

Tunisia drew 0-0 with Mali in the second leg of their African Qualifiers final round match, keeping their 1-0 aggregate advantage from the first leg on the road. The aforesaid result may allow them to enter their continental qualifier with some spirits.

Equatorial Guinea, on the other hand, is currently having a dissatisfyingly inconsistent season. Their records aren’t particularly outstanding, and they were eliminated from the World Cup race in the second round of the African qualifiers last year.

Equatorial Guinea’s most recent match was a goalless draw against Angola in a friendly match on the road. With that draw, they have now gone three games without a win. Two of them were also demoralising defeats.

Tunisia has always been the dominant force in this head-to-head match, and Tunisia won their most recent match at this location by a score of 3-0. Four of their seven head-to-head matches were high-scoring affairs.

Tunisia has been playing well at home recently. They’ve gone undefeated for the most part, and their defensive and offensive lines, with the exception of a few of losses, appear to be in excellent shape.

Equatorial Guinea, on the other hand, has been in good form on the road recently. They are, however, winless in their most recent road games. They’ve also conceded two or more goals in five of their last ten competitive road games.

Furthermore, Tunisia has a solid record versus Equatorial Guinea in this encounter. As a result, we believe Tunisia will come out on top in this match and start the AFCON season on a high note. 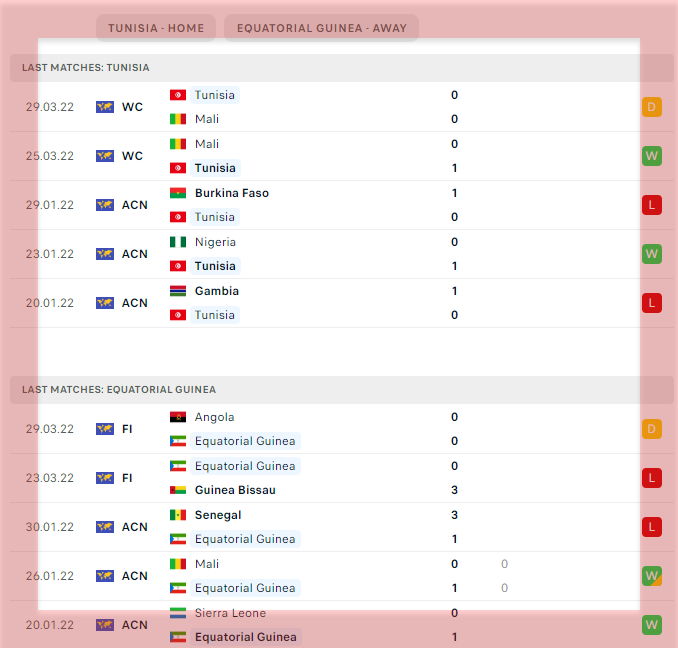