Tunisia vs Australia – After playing Denmark to a scoreless draw in a World Cup encounter, Tunisia gets ready for this contest. In that game, Tunisia had 39% of the possession and 13 shots on goal, but none of them were successful.

With 11 attempts, Denmark had no goalscoring shots. Recently, Tunisia has had difficulty playing offensively. In their last six games, they have only scored three goals total against opponents.

Tunisia has also had six goals scored against them in those encounters. However, we must now wait to see if that pattern will continue in this game.

Australia and their supporters will be hoping for a better outcome after losing to France in their previous World Cup match.

Australia had 37% of the ball in that game and made 4 shots on goal, with 1 of them being successful. Australia’s Craig Goodwin (9′) was the scorer.

France had 23 shots on goal overall, with 4 of those attempts finding the back of the net. Kylian Mbappé (68′), Olivier Giroud (32′), and Adrien Rabiot all scored goals for France.

The Australia defense has put in a string of strong performances, with the total number of goals they have allowed in their last six games coming to only four. Meanwhile, their own offensive force has accrued 8 points.

When all things are considered, Australia has a chance to score against this Tunisia lineup, albeit it might not be enough to prevent a loss. After 90 minutes, Tunisia will win by a score of 2-1. awaiting this with interest.

In terms of betting odds for the final score, betting on Tunisia is best priced at 2.11, betting on a tie is 3.2, while betting on Australia to win is 3.74. These are currently the most competitive market prices available. 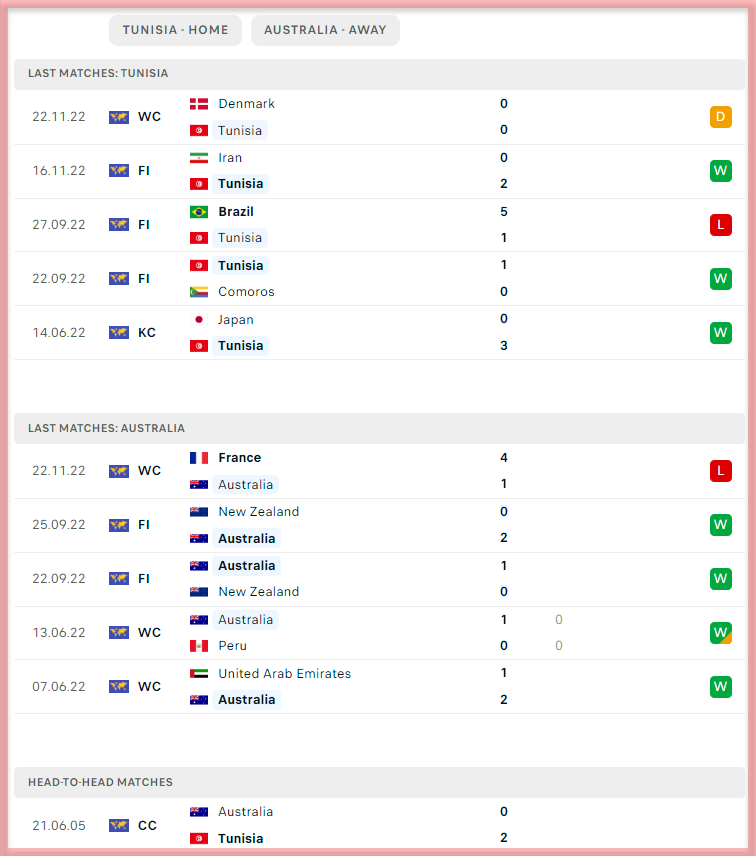