Troyes vs Lens – Preview, and Predictions

Troyes vs Lens – Troyes’ recent performances have been a bit of a letdown. The club has one victory, two ties, and two losses in its last five games. Their blunder has sent them to the bottom part of the league table, where they are currently ranked 15th. With only two games remaining, the squad has secured a place in Ligue 1 for the following season.

Troyes’ most recent encounter was against PSG. Both teams scored two goals in the encounter, which resulted in a 2-2 FT draw. Lens has performed admirably in previous encounters. The team is unbeaten in its past six games and has only lost twice in its last ten. Their strong play has enabled the club climb the standings to seventh place, only two points behind the last team with a chance to compete in the play-offs. They still have a chance to qualify for the playoffs in Ligue 1 with two games remaining.

Lens’ most recent encounter was against Reims. Despite the fact that Reims had taken the lead, Lens rallied back to score two goals, resulting in a 1-2 FT triumph for Lens. In the forthcoming encounter, Troyes will face a difficult task against Lens. Troyes’ recent form has been erratic, whereas Lens has gone undefeated in their last six games.

Troyes have improved their home performance. The team has won three, drawn one, and lost one of their past five matches. The majority of the games, though, have ended with under 2.5 goals. Lens has performed admirably on the road, going undefeated in their last three games. According to the records, Lens will most likely win the match because they are the better team of the two. With both teams scoring, the game will almost certainly end with more than 2.5 goals. 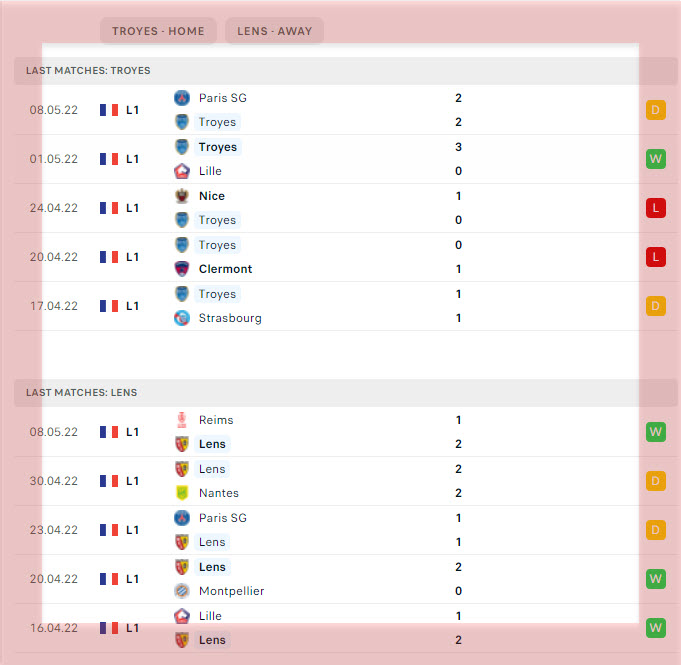