Tromso vs Viking – Preview, and Prediction

Tromso vs Viking – The outcomes of Tromso‘s league matches have been uneven. Two victories, three draws, and two losses have been recorded in the team’s seven matches.

After losing to Sarpsborg 08, the team has gone three games without losing. Their current performance puts them in ninth place in the league table, with nine points.

Tromso completed last season in the bottom half of the table and will be hoping for much better results this season. Tromso’s last match was against Bodo/Glimt.

Both clubs scored one goal apiece, and the game ended in a 1-1 FT draw. Viking has performed admirably in its matches thus far, placing the squad among the Eliteserien’s top contenders.

With only eight games under its belt, the club has already won six. They’ve also gone undefeated in their last five games. With 19 points from their first three games, the squad is now in first place in the league rankings.

Viking’s most recent encounter was against Jerv, in which Viking scored three goals and Jerv only one. The final score was 3-0 in overtime.

Viking won the last match with a 0-2 FT result. In their last three home games against Viking, Tromso has failed to win. Tromso and Viking have won three of their last seven head-to-head meetings.

In the forthcoming encounter, Tromso will face a difficult opponent in Viking. Viking has won four of its previous five matches, while Tromso has only won two. Viking has also scored more than 1.5 goals in three of these games.

Tromso has won both games in their home stadium. They’ve also scored more than 1.5 goals in two of their three home games. So far this season, Viking has gone on three road trips, two of which have resulted in victories for the team.

They’ve also scored over 1.5 goals in their last two away games. Viking is the overwhelming favorite to win the match. We should predict the match to end with over 2.5 goals as well, given both clubs’ previous performances.

Tromso vs Viking – Head To Head 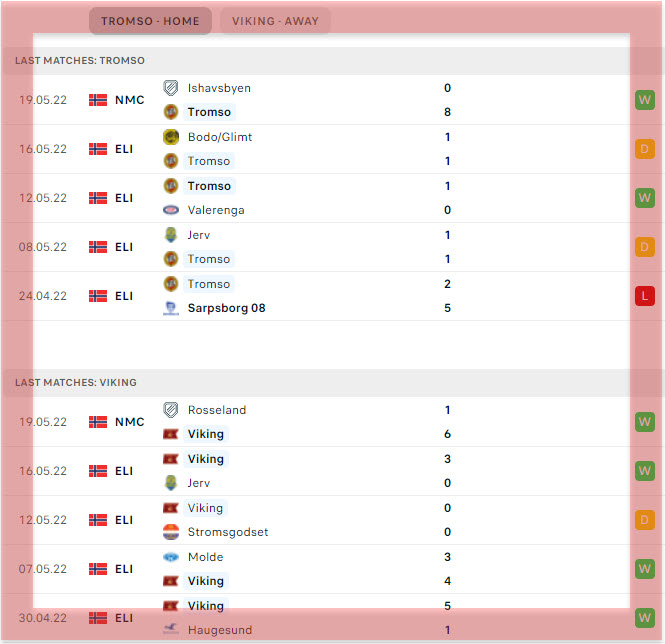 Our Prediction: Away Win Or Draw