Trabzonspor vs Altay- Preview, and Prediction

Trabzonspor vs Altay- Trabzonspor has had difficulty winning their recent games. The club has three wins, six draws, and one loss in their previous ten games. Despite the glitch, the squad remains at the top of the league table, nine points ahead of the team in second place. They have secured their place in the Champions League qualifying round with only two games remaining.

Trabzonspor’s last Super Lig game was against Hatayspor. Both clubs scored one goal apiece, and the game ended in a 1-1 FT draw. In their most recent matches, Altay has struggled. Only three of the team’s last 10 matches have resulted in victories. The team has three draws and four wins from the remaining matches. With 34 points, the squad is now ranked 18th in the league rankings. The team remains in the relegation zone, nine points behind the first team to get out of it. They have no chance of avoiding relegation this season with only two games remaining.

Altay’s last match was against Giresunspor. Both clubs scored one goal apiece, and the game ended in a 1-1 FT draw.

Despite the fact that Trabzonspor has gone undefeated in their previous six matches, the most of them have finished in draws. Only one of the six games has resulted in a victory. Altay’s matches have yielded uneven results.

In this encounter, Trabzonspor gets the advantage of playing on their home turf. This season, they have not lost a single match at home in the Super Lig. On the other hand, Altay has struggled in their home games. Two victories, one draw, and seven losses from the last ten matches.

Trabzonspor is the overwhelming favourite to win the match. We may expect the match to end with over 2.5 goals because both teams are likely to score. Trabzonspor has scored at least one goal in each of their last two matches and is likely to do so again in this one. 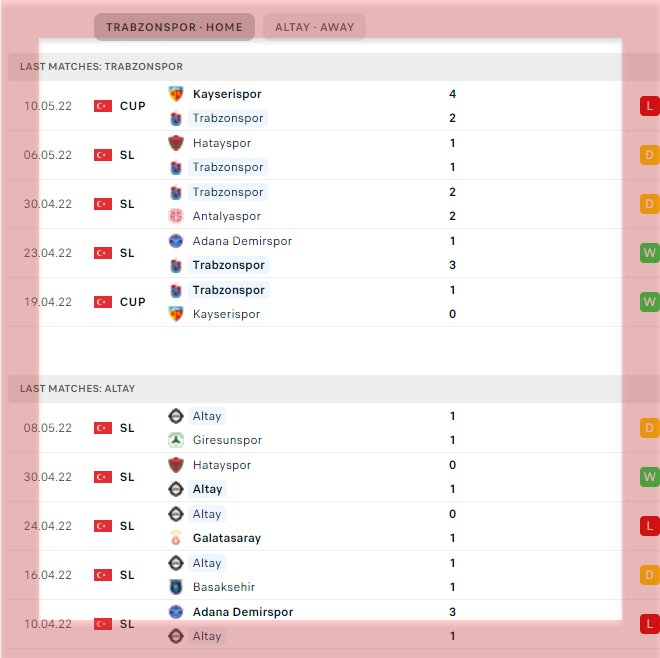