Toronto FC vs Chicago Fire FC – Toronto FC has had a slow start to the season. They had progressed since then, but they were unable to maintain it. They are currently in poor form and are at second place from the bottom of the table. They also have an underwhelming defensive lineup.

In their most recent league match, Toronto FC drew 2-2 with DC United on the road. With that loss, they have now gone six games without winning. They’ll be looking to break out of their funk by securing a win.

The Chicago Fire have made a strong start to the season. They started the season with five consecutive wins, but they couldn’t keep it up. They are, however, winless in the league at the moment. They are also at the bottom of the table with 11 points.

The Chicago Fire were defeated 1-0 on the road by New York City in their most recent league match, extending their winless streak to nine games. Following such a set of recordings, they will be in the lowest of spirits.

Toronto FC has won all eight of their previous meetings with Chicago Fire.
In seven of the last eight head-to-head games between these two teams, the both teams to score option has been successful.

Toronto FC won their most recent match at this location by a score of 3-1.

Toronto FC has won three of their last five league games at home, each time scoring two goals. This is more than enough for them to summon enough spirits to fight the Chicago Fire, who occupies the lowest slot on the table.
On the other hand, the Chicago Fire are now on a five-game losing streak on the road. Four of those five fixtures also turned out to be a dismal display.
Furthermore, in recent head-to-head matchups with Chicago Fire, Toronto FC had the upper hand. As a result, we believe Toronto FC will win this match. 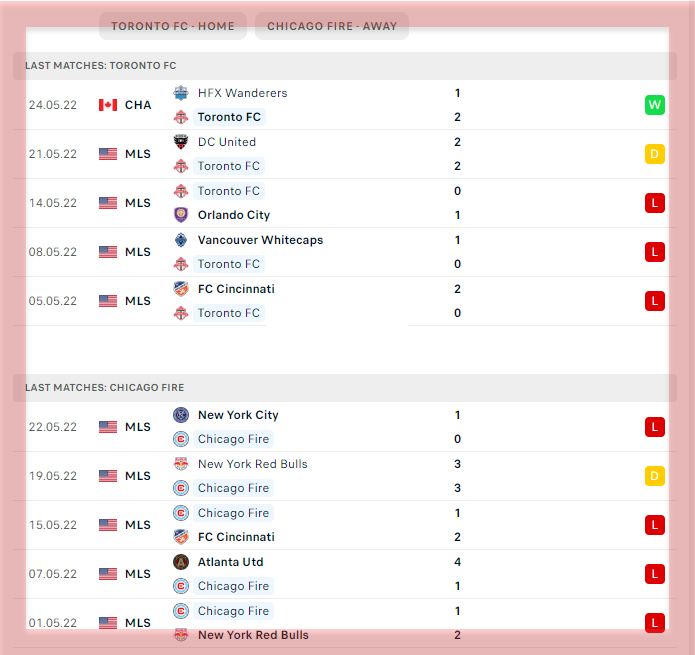