Torino vs Roma – Preview, and Predictions

Torino vs Roma – When Roma finishes their 2021-22 domestic season away to Torino on Friday night, they will be aiming for a Europa League finish in Serie A. Jose Mourinho’s side are currently sixth in the table, one point ahead of seventh-placed Fiorentina, with Torino in 10th place, having collected 50 points from 37 league matches this season. Torino have finished 16th and 17th in their previous two Serie A campaigns, so there has been a clear improvement this season, with the club currently sitting 10th in the table, two points behind ninth-placed Verona ahead of their final match of the season against Roma.

The Bulls have 50 points after winning 13, drawing 11, and losing 13 of their 37 league games this season, and they cannot finish worse than 11th no matter what happens in the final batch of Serie A fixtures. Torino is coming off a 1-0 win against Hellas Verona on May 14, with Josip Brekalo scoring the game’s only goal in the 19th minute, and a solid run of form that has seen the Turin side lose just one of their last eight Serie A games.

Ivan Juric’s team has won eight, drawn five, and lost five of their 18 home league games this season, accumulating 29 points, and they will face a Roma side that has been erratic on the road, winning seven, drawing three, and losing eight of their 18 away league games.

Torino beat Roma 3-1 in the identical encounter last season, but they lost 1-0 in Rome earlier this season. Roma, however, are presently sixth in the rankings with 60 points after 17 wins, nine draws, and 11 defeats from 37 games, one point ahead of seventh-placed Fiorentina.

With a win on Friday, they can finish in the top six and qualify for the Europa League next season, while they can still finish ahead of Lazio if the White and Sky Blues lose against Verona on Saturday, as Mourinho’s team has the stronger head-to-head record.

Roma will play Feyenoord in the Europa Conference League final on May 25, so if they miss out on Serie A, they will have another chance to qualify for next season’s Europa League. Mourinho’s side, who reached the European competition’s semi-finals earlier this month, has not won a game in Serie A since April 10, drawing three and losing two of their past five games in the Italian top division.

The Yellow and Reds drew 1-1 with Venezia on Saturday, with Eldor Shomurodov coming off the bench to equalize for the home side after falling down inside the first minute. Roma’s recent Serie A play has been underwhelming, and they will face a Torino side that will be full of confidence after a string of impressive successes in recent weeks. A draw would leave Roma vulnerable in the top six, although it’s difficult to tell the two teams apart here. 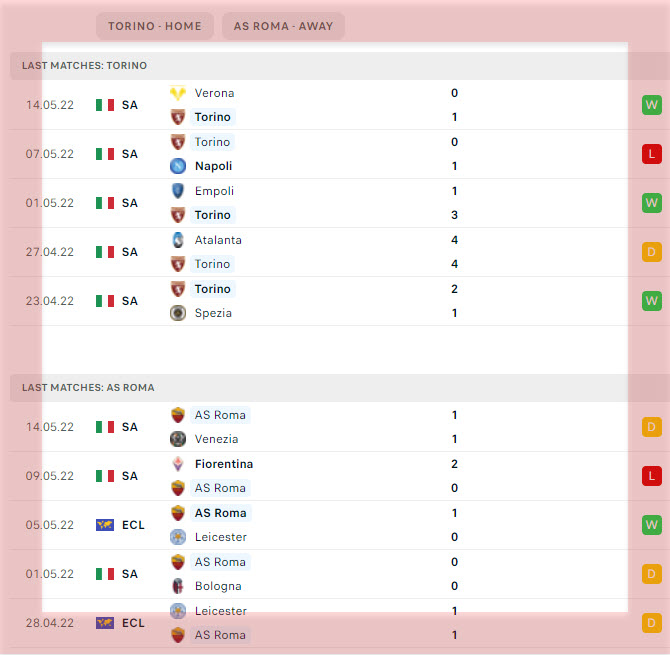