Torino vs AC Milan – With four straight victories in Serie A, the defending champions have put themselves back in title contention. Last Saturday, AC Milan thumped Monza 4-1 at home to secure their fourth consecutive league win and move up to second place in the rankings.

Last Saturday, Brahim Diaz scored two goals against Monza, and he was the undisputed star of the show. With four goals this season, he is now second on his team’s all-time list, trailing only Rafael Leao by one.

Midweek saw AC Milan in action, as they faced off against Dinamo Zagreb in the fifth round of the UEFA Champions League in the Croatian capital.

Before their away game against Torino on Sunday night, the team received five days of rest. After Torino’s shocking win away at in-form Udinese last time out, this should be one of the more entertaining games of the weekend in Serie A.

As a team, Il Toro is having a below-average season thus far. They are now 10th in the league table, with 10 goals scored in 11 games. Torino has not seen three or more goals scored in any of their five home games this season. Only two of the four had a 2-1 score.

There have been seven previous encounters between AC Milan and Torino, with AC Milan winning six of them and drawing one. In the previous 44 meetings between the two teams, Torino only managed to defeat I Rossoneri three times.

Torino have gone six consecutive matches without scoring against AC Milan. Torino play a defensive brand of soccer and have historically struggled to score while facing AC Milan (particularly in the last couple of years).

It’s for this reason that we think the 4.33 odds for AC Milan to win and under 2.5 goals in the final score are the best bet. The 7.00 odds on AC Milan winning by a score of 0-1 are also worth a shot. 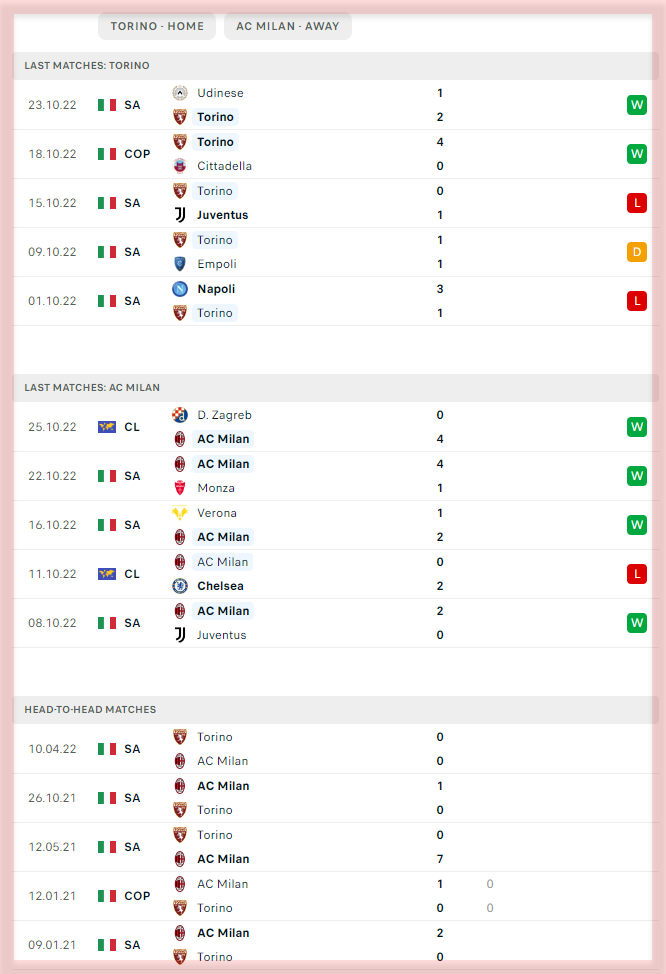