Tondela vs Vitoria Guimaraes – Tondela is currently fighting relegation to Liga Portugal 2. They are now in second place. They will play Vitoria Guimaraes at Estádio Joo Cardoso on Sunday with the hopes of ending their losing streak.

With 42 points from 30 games, Guimaraes is in sixth place in the rankings. They each won and lost 12 matches, as well as drawing six times.

They are a team with a lot of inconsistency, as they win and lose in a variety of ways. The visitors have been conceding goals recently, despite the fact that they just need 6 more points to qualify for the ECL.

Gold and greens, on the other hand, are ranked 17th on the table with only 25 points. They won seven of the league’s 30 matches, drew four times, and lost 19 times.

They had lost their last two league games coming into Sunday, and a win here would put them out of the relegation zone.

Tondela will be hoping for a better result here after losing 2-0 to Moreirense in their last encounter in the Primeira Liga. They’ve been outscored in each of their past six games, surrendering 13 goals in the process.

Guimaraes won four of their last five head-to-head matches, while Tondela only won once. In total, 18 goals were scored in those games, averaging 3.6 goals per game.

Vitoria Guimaraes won 5-2 in the reverse match. Coming into this game, Tondela had not won at home in the previous six league games. They have also struggled in front of goal recently, with the team failing to score in two of their last five games.

Meanwhile, Guimaraes has recently loved playing away from home, with the team currently on a two-game winning streak.

They also defeated this opponent in their previous two away h2h meetings. Knowing this, we expect Guimaraes to win tomorrow against Tondela. 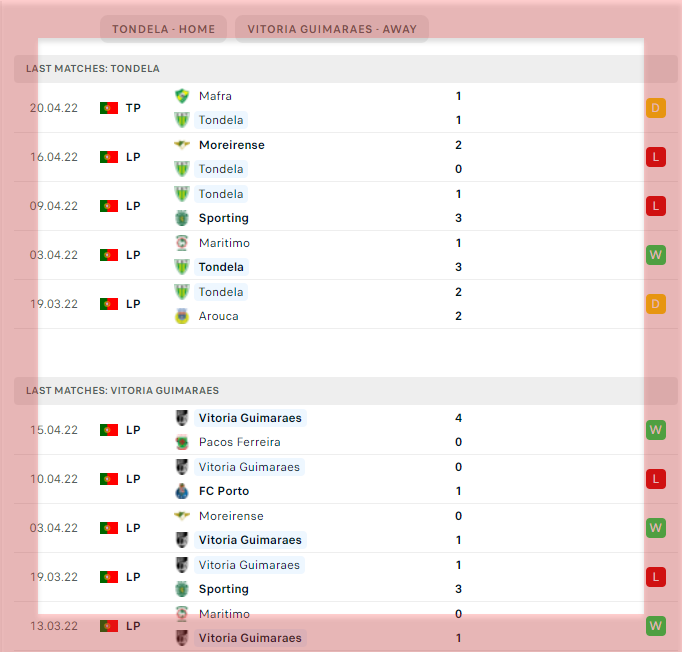