Tondela vs Boavista – Preview and Prediction

Tondela vs Boavista – Tondela hasn’t won in 6 games, which has put them in the zone for getting kicked out of the league. On Saturday, the last game of the season, they will play Boavista at Estádio Joo Cardoso.

The Checked ones are 11th in the standings with 37 points from 33 games. In the league, they won seven games, tied 16 games, and lost 10 games. Boavista has nothing to play for in this meaningless match on Saturday night because they can’t make it to Europe and won’t be relegated.

Last Friday, Boavista held Vitoria Guimaraes to a 1-1 draw at home. This came after they beat Moreirense 2-1 on the road in their last game. Ten goals have been scored against them in their last six games, in which they have lost five.

On the other hand, Tondela has 27 points and is in 16th place on the table. Out of the 33 games they played, they won seven, tied six, and lost twenty. The fact that they have given up 65 goals so far, which is the most in the league, shows how hard it has been for them to defend.

Tondela won’t want a repeat of what happened in their last game, which was a 3-0 loss to Gil Vicente in the Primeira Liga. The home team needs to win while Arouca needs to lose, and a three-goal swing will only help them get out of the bottom three.

Boavista hasn’t been able to beat Tondela in the league in the last six games. But they haven’t won a league match at home in the last seven games.

The hosts can at least keep their current Play-off spot and hope to stay alive that way, but they have to match Moreirense’s result below them to do that.

Boavista, on the other hand, has only lost one of their last six league games away from home. They haven’t lost to this enemy in their last two head-to-heads.
We think that a tie or a win for Boavista is the safest bet, since they are still in good form on the road.

Tondela vs Boavista – Head To Head 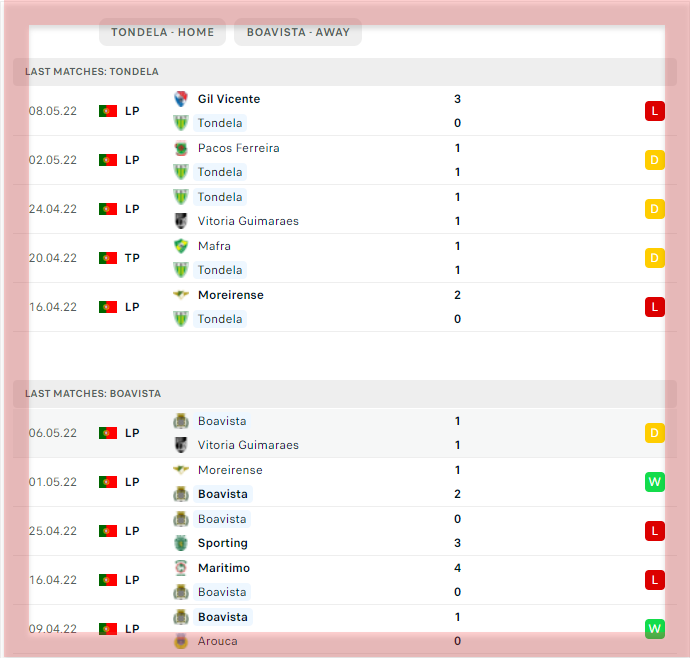