Tenerife vs Cartagena – Preview, and Prediction

Tenerife vs Cartagena – On Sunday night, Tenerife will host Cartagena in the final regular-season game of the year. Tenerife finished the previous Segunda Division campaign in the bottom half of the rankings, a significant improvement.

Tenerife’s head coach, Luis Miguel Ramis, may be pleased with his team’s performance this season because, no matter what happens on the final day of the regular season, Tenerife will play in the promotional playoffs.

On the final day of the regular season, Ramis’ men will have something to play for. They’re hoping to hold on to fourth place in the league and earn a home playoff semi-final game.

Girona and Las Palmas are tied for fifth place with two points each behind Tenerife. Since they’ve lost their last two league games against Malaga and Eibar, Tenerife will be trying to lift their spirits in training ahead of their playoff ties.

The opposition in this case, though, will be anything but easy for Cartagena. After a 5-0 thrashing of Amorebieta at the weekend, the visitors will be raring to go for this match.

Just one of the last six Segunda Division matches for FC Cartagena has ended in defeat. Tenerife is in a slump, so can they take advantage and get a result at Estadio Heliodoro Rodriguez Lopez?

This season’s 1-1 draw at Estadio Municipal Cartagonova was the third time these two teams have met in a head-to-head encounter without a victor.

Three or more goals have been scored in only one of the last seven meetings between these two sides. Considering that Tenerife has lost its past two league games, we’d rather see a tie than a victory for the Canaries.

In the last few weeks, Tenerife has been playing a very defensive style of football. They haven’t scored three or more goals in any of their last five league games. Given the current H2H history of this fixture, we have to choose the Under 2.5 goals FT as a solid bet.

Tenerife vs Cartagena – Head -to -Head 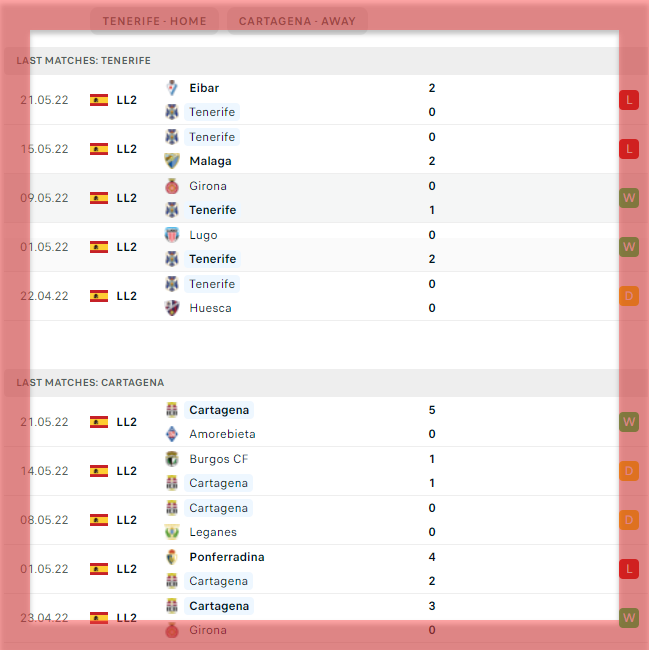