Tenerife vs Almeria – preview and prediction – team news, and lineups

Tenerife vs Almeria – Almeria has been struggling recently, with the side failing to win in their last two matches. They are, nevertheless, second in position to be promoted to LaLiga, behind Eibar. Tenerife have won three and lost two of their previous five league matches. In the Play-Off zone, the hosts have recently appeared to be caught off guard at home. With only four points and a spot separating them, they will square off in the 32nd Round of LaLiga 2 on Monday at Tenerife’s Estadio Heliodoro Rodrguez López.

Almeria is in second place with 59 points from 31 games. They won 18 games in the league, drew five, and lost eight. They scored 50 goals while surrendering 28, demonstrating their outstanding attacking and defensive capabilities.

Prior to this, UD Almeria drew a dramatic 3-3 draw with CD Lugo in La Liga 2. Joan Rubi’s UD men have scored 11 goals in their last six outings. The total number of goals scored against them over that time span is seven.

Tenerife, on the other hand, is ranked fourth on the standings with 55 points. They won 16 of the 31 matches they played, while drawing seven and losing eight.

Tenerife have not beaten Almera in their previous three league matches. We do, however, predict a home victory, given they have won 14 of their last 19 home games at this level, and it’s difficult to envisage anything other than a home victory in this meeting of high-fliers and strugglers. 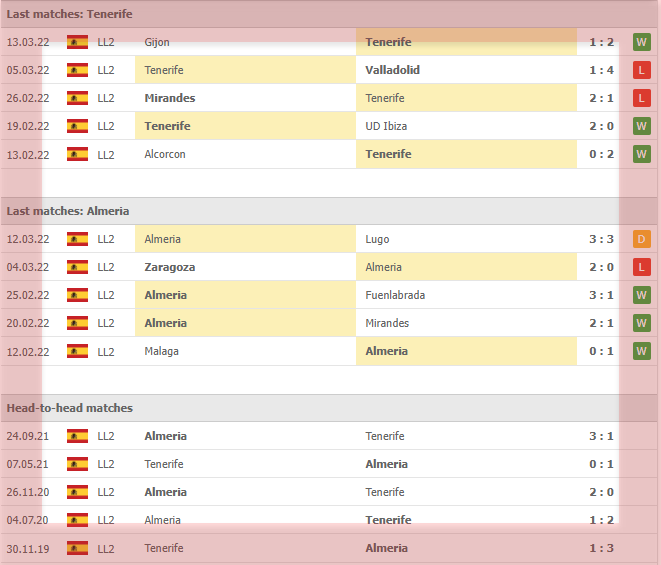