Switzerland vs Cameroon – Preview, and Prediction

Switzerland vs Cameroon – Brazil is the major hindrance standing in the way of the Swiss and the Cameroon’s ascent to triumph. Due to their placement in the same group as the top-ranked team in the world, both sides are forced to aim for a decisive victory in their opening match.

Given how they got to the biggest stage of the tournament, the Swiss are undoubtedly in a good mood. Even despite being placed in the same group as Italy, the defending European champions, they went undefeated during their qualification campaign in the UEFA zone.

They not only scored the most goals in the group, but they also allowed the fewest — only two goals over the course of the entire competition. Their realistic goal is to place behind Brazil in the group, and for that, a victory on Thursday is all but required.

Of course, they are confident because they are from the UEFA region; after all, European teams have won the last four World Cups.

To get here, Cameroon also moved the heavens and the earth. Also take notice that they had to compete in the difficult and somewhat unfair African Qualifiers in order to obtain tickets to Qatar, since group winners were matched up against one another in playoff games.

There is nothing better than a squad that has experienced defeat; therefore, this has undoubtedly been advantageous for whoever succeeded.

Recent performance and experience, meanwhile, marginally tip the scales in favour of the European group. In the previous two competitions, they advanced to the Round of 16, but their opponents were unable to even qualify for Russia 2018.

Expect Switzerland to win after a struggle.

These two squads are facing off against one another for the first time in this matchup.

The beginning of the World Cup will excite the Swiss. They believe they are in excellent shape and that they can maintain this momentum. In addition, they will be grateful that they did not have to face Brazil right away.

To get to the point, Switzerland won their last three official games three times in a row, and not just against any minor team. Former world champions Spain, former European champions Portugal, and the Czech Republic were all destroyed by them.

They can definitely defeat the inferior Cameroon in this opening match. This, the club believes, will serve as the tone for the rest of the campaign. Additionally, it is crucial because of the upcoming Brazil threat.

In the meanwhile, Cameroon can undoubtedly make life difficult for their rivals. However, history ultimately works against them.

No African team has ever won the World Cup, and none of them have advanced past the Quarterfinals either.

Switzerland should triumph in a dramatic, hard-fought match this Thursday. Over the next several weeks, they will primarily rely on experience, and who better to guide the young players in the mix than Xherdan Shaqiri?

You can trust the little magician to find the Swiss team’s back of the net if necessary.

Switzerland vs Cameroon – Head -to- Head 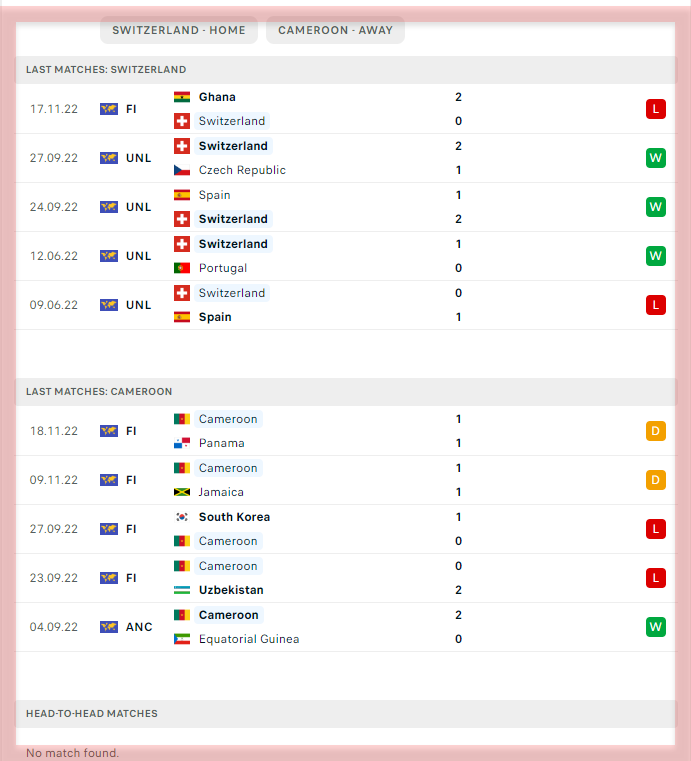 Our Prediction: Cameroon Win or Draw