Swindon Town vs Stevenage: Swindon Town is looking to continue their winning ways after a 5-0 victory over Grimsby Town in League Two.

Charlie Austin scored in the 25th minute, Marcel Lavinier in the 62nd, Jonny Williams in the 66th, Ronan Darcy in the 78th, and Saidou Khan in the 88th.

The back line for Swindon Town has always been good, as shown by their most recent results. The total number of goals scored by Swindon Town throughout the course of their past six games is 4, as they have left the opposition with nothing to work with. However, there is no guarantee that such a pattern will continue throughout this game.

In their previous three league games, Swindon Town had lost to Stevenage. Stevenage is coming into the game after beating Leyton Orient 3-0 in League Two in their last game.

The Stevenage defense has put on a string of great performances, with their combined ‘goals against’ total sitting at 3 from their past 6 matches. Their forwards have netted 10 goals within that same time frame.

There hasn’t been much to separate the clubs in their previous head-to-head matches dating back to November 27, 2018, with Swindon winning two, Stevenage winning two, and two games ending in draws in regular time.

They combined to score 12 goals in those games, with 5 for the Robins and 7 for Boro. 2 goals have been scored on average per game.

The previous league meeting between these teams took place on League Two Match Day 14 on October 8, 2022, with Stevenage defeating Swindon Town 2-0. Scott Oldham served as the referee for the game.

Gavin Gunning, the manager of Swindon Town, has no concerns about his players’ physical condition going into this game because he has a completely injury-free roster to choose from.

There are no reported fitness issues for Stevenage manager Steve Evans going into this game because he has a perfectly healthy bunch to choose from.

We think that Stevenage and Swindon Town might not be able to work hard enough in this game to score.

Looking at what the bookmakers’ view is of this game on the 90 min. result market, a victory for Swindon Town can be had for 3.11, going for the draw is 3.34 & staking on the winning team to be Stevenage gets you 2.31. These are the best prices being offered at this very moment. 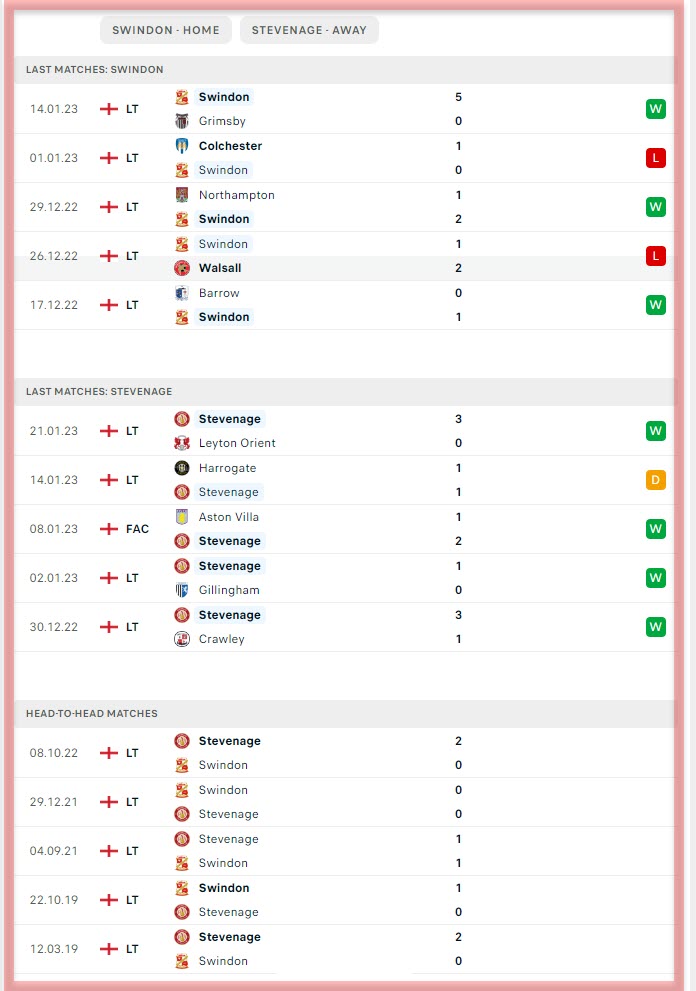