Swindon vs. Forest Green – Forest Green Rovers will be looking to extend their lead in League Two when they travel to Swindon Town on Tuesday. The visitors lead second-placed Exeter City by three points, while Swindon are tenth, two points behind seventh-placed Sutton United (43).

Swindon travel to the league leaders on Tuesday after a 3-0 win against Hartlepool United on Saturday, moving them up to 10th in the table, two points behind Sutton.  The Robins, who were relegated from League One last season, will be aiming for maximum points from their final three league games against Forest Green, Barrow and Walsall.

While Ben Garner’s side have struggled to win regularly in front of their own fans this season, two wins in their previous three matches have put them in good contention for a top-seven finish. A 2-0 win against Forest Green earlier this season, plus two wins against Tuesday’s opponents, should give Swindon confidence going into the game with the league leaders.

Meanwhile, Forest Green come into this game off a goalless draw with Bristol Rovers on Saturday, leaving them top of the table with 83 points from 43 games.  Rovers are three points clear of Exeter after the same amount of games, and their point against Bristol Rovers was enough to secure their first ever promotion to League One ,It would be fitting if Rob Edwards’ side won the league, and it will be interesting to see how they fare in the third division next season.

Rovers have won 37 points from 21 games on the road this season, with only two defeats, and they will fancy their chances of going unbeaten. Edwards’ side face Harrogate Town in their final game before travelling to Mansfield Town on May 7. Both teams are pushing for a playoff berth, so the meeting in Nottinghamshire might be crucial.

Swindon need a win to qualify for the playoffs, but they will be underdogs against the league leaders. Forest Green, however, are still seeking top place, and we predict a low-scoring tie on Tuesday night. 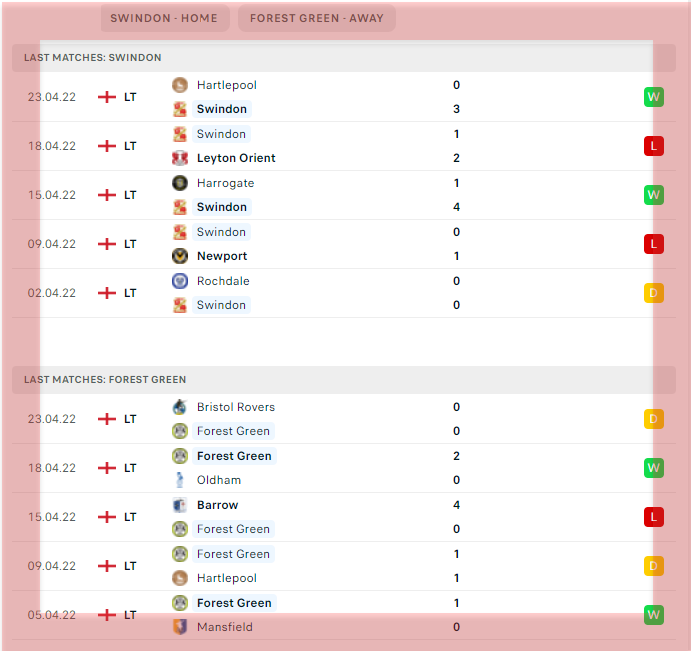