Sweden vs Algeria – Preview, and Predictions

Sweden vs Algeria – Sweden and Algeria hope to close the year with a victory in Malmo on Saturday. Janne Andersson’s team beat Mexico 2-1 while their guests drew 1-1 with Mali.

Sweden and Mexico didn’t put out their best squads for their midweek friendly, with Mexico training for the World Cup. Andersson’s side took advantage with a narrow win to harm Mexico’s momentum ahead of Qatar 2022.

Marcus Rohden and Mattias Svanberg scored each side of an Alexis Vega equalizer to break Sweden’s five-game losing skid. The Scandinavian nation is coming off relegation to League C in the UEFA Nations League.

Sweden won’t be the only Nordic nation watching the World Cup from home this year. Finland and Norway also failed to qualify, while Denmark advanced, marking a fall from grace after reaching the quarterfinals in 2014.

The Blue and Yellow face Belgium, Austria, Estonia, and Azerbaijan in their Euro 2024 qualifying group, and defensive frailties have been a problem.

Vega’s goal for Mexico extended Sweden’s run without a clean sheet to six matches in all competitions. They have also failed to win any of their last three home matches, with Norway, Serbia, and Slovenia all taking a point.

Algeria has won friendly matches against Iran, Guinea, and Nigeria since June, but drew with Mali on Wednesday.

Djamel Belmadi’s players were eliminated from the World Cup by Karl Toko Ekambi’s last-gasp goal against Cameroon in March, but their schedule for the New Year is full.

Algeria will face Libya, Ethiopia, and Mozambique in the African Nations Championship in January before resuming qualification for the next Africa Cup of Nations. The Fennec Foxes had won nine of their past 10 road games before heading to Stockholm.

Sweden has three wins and a draw in four friendly matches against Algeria, but they haven’t played since 1990, when Stefan Schwarz scored in a 1-1 draw.

Sweden had no new injuries in their recent win over Mexico, although goalie Andreas Linde withdrew due to a muscle ailment.

Emil Holm and Samuel Gustafson made their senior international debuts in midweek, but Andersson could call on his rested bighitters.

Ismael Bennacer and Nabil Bentaleb were both called in as halftime substitutes for Algeria’s 0-0 draw with Mali. Ramiz Zerrouki and Adem Zorgane could be replaced by the seasoned pair, while Islam Slimani made his 91st national team appearance on Wednesday.

The Brest striker needs 10 more caps to become Algeria’s all-time greatest appearance-maker, and he might start if Karim Aribi is benched. Ramy Bensebaini should return from COVID-19, while goalkeeper Anthony Mandrea will allegedly return to Caen.

Bringing back the big guns could help Algeria, which has a tendency for winning away, but Sweden has its own veteran internationals. Algeria’s midfield and offense should help them beat Andersson’s team for the first time. 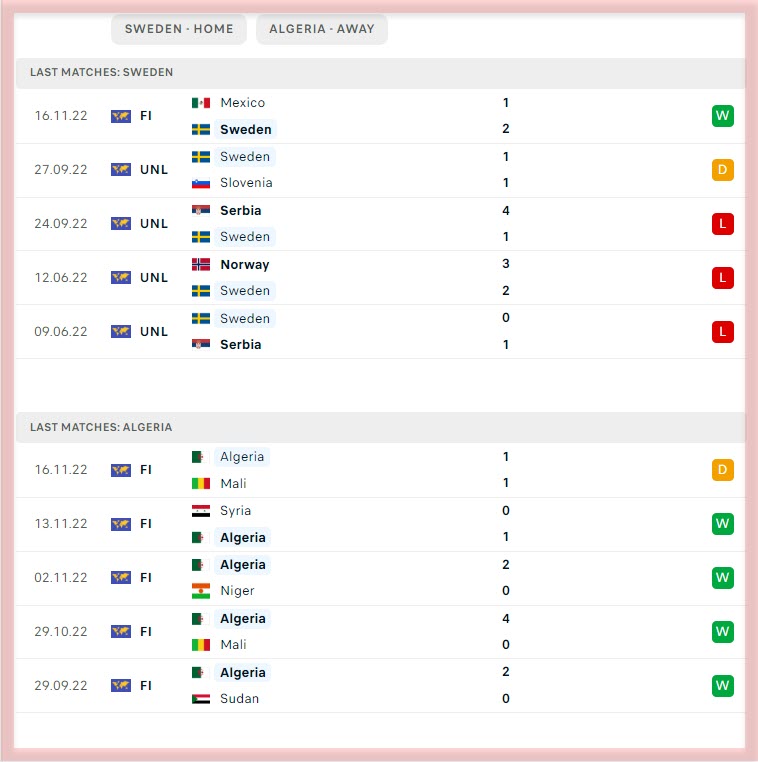