Sundsvall vs Hacken – Preview, and Prediction

Sundsvall vs Hacken – On Matchday 14 of the Allsvenskan, struggling Sundsvall hosts table-topping Hacken. The two teams are separated by 18 points and 15 positions. Tomorrow, watch as these two teams square off at NP3 Arena.

Hacken has 28 points after 13 games, which puts him atop the Allsvenskan rankings. In the league, they only lost once, drew four times, and won eight times.

They are one of the greatest attacking teams in the league and have scored two goals or more in 9 of their last 13 games.

Sundsvall, on the other hand, has just 10 points and is positioned in position 14 on the standings. Out of a total of 13 games played, they had three wins, one tie, and nine losses in the league. They still require 4 points to escape the drop zone, which has trapped them there.

The home team enters this match after finishing the previous season with promotion and coming off a 1-1 draw away to Varnamo last weekend. In their last 5 games in all competitions, Sundsvall have failed to score in 2 of those games.

The last time Sundsvall defeated this rival was back in 2016, which was more than 8 head-to-heads ago. Hacken has won the last 4 head-to-head games in a row while retaining clean sheets overall.

Their previous six encounters had five one-sided discussions. In their last 8 matches versus Sundsvall, Hacken has gone undefeated, winning 6 and drawing 2.

When they last faced off in 2019, they also won the domestic double. In addition, they have won all seven of their road league games. Sundsvall, however, has dropped the last four head-to-head games in a row without scoring.

In nine of their last thirteen games this season, the team has given up two or more goals. A low-scoring contest is anticipated as the away club will enter this one as the clear favourites. 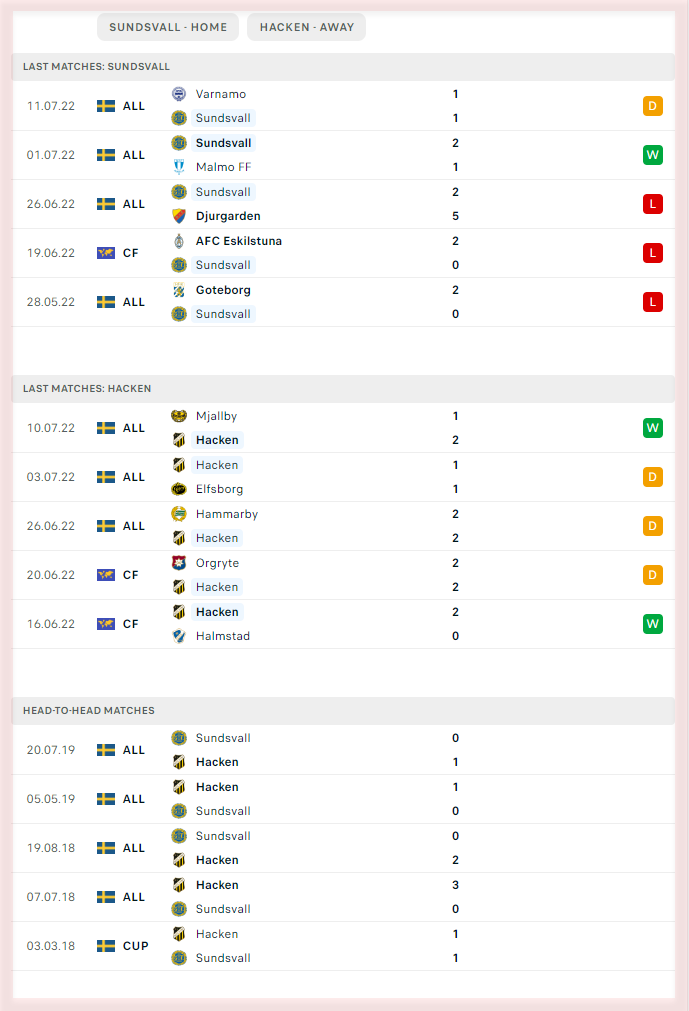