The hosts are still in a dangerous predicament as a result of their poor form, while the visitors continued their ascent away from danger last weekend with an amazing victory.

Stuttgart has scored twice in each of their last two games after failing to score in five consecutive matches on either side of the winter break.

Die Roten, on the other hand, have failed to win any of their matches after surrendering seven times against Eintracht Frankfurt and Bayer Leverkusen.

Despite the fact that Pellegrino Matarazzo’s team was not anticipated to pick up many points against two European contenders, he will be frustrated after coming away with nothing despite finding their goalscoring touch.

Bochum, on the other hand, comes to the Mercedes Benz Arena on the heels of one of their best performances in recent memory, with a 4-2 victory over league leaders Bayern Munich last Saturday.

Manager Thomas Reis will have been fearful of a repetition of the 7-0 humiliation in the reverse fixture back in September after falling behind to a Robert Lewandowski goal after only nine minutes.

Sasa Kalajdzic, last season’s leading striker, returned to action for Stuttgart in the new year after missing much of the season due to injury.

However, the Austrian was ruled out of the trip to Leverkusen last weekend due to a calf injury, and he is expected to be out again on Saturday, with Tiago Tomas set to fill in after scoring twice in only his second game for the club since joining on loan from Sporting Lisbon in January.

COVID-19 has ruled out Daniel Didavi, Tanguy Coulibaly, and Enzo Millot, while the virus has cast doubt on Omar Marmoush and Waldemar Anton.

Owing to injury, Nikolas Nartey and Mohamed Sankoh are out, while Roberto Massimo and Lilian Egloff are doubts due to sickness and calf problems, respectively, in what might be a long list of absentees for the hosts.

After missing last weekend’s amazing victory, Reis is expected to recall first-choice goalkeeper Manuel Riemann, with Michael Esser set to slide to the bench as a result.

The only negative aspect of the day was Elvis Rexhbecaj’s fifth yellow card of the season, which means he will miss Saturday’s encounter due to a one-match suspension.

Bochum’s only other absentee is Simon Zoller, who has been ruled out for the season owing to a catastrophic knee injury. Milos Pantovic is expected to fill in. 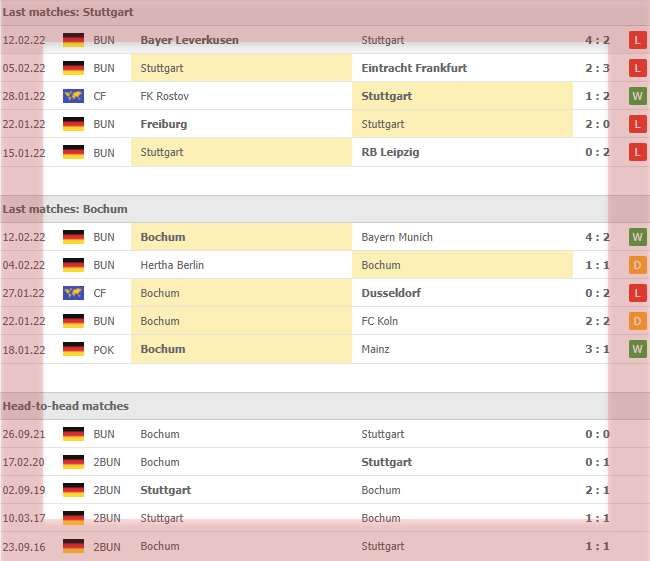