Stuttgart vs FC Koln – Stuttgart kept their hopes of catching the safe zone alive ahead of the final day encounter by winning a vital point away at ten-time consecutive champions Bayern Munich at Allianz Arena seven days ago.
Pellegrino Matarazzo’s troops made a valiant performance in the Bavarian capital, earning a significant point for their efforts.tarazzo’s side avoid the relegation playoffs.

Stuttgart was three points behind Hertha Berlin in the safe zone after that point and Hertha Berlin’s home loss against Mainz. Because the Berlin team will face Borussia Dortmund away at Signal-Iduna-Park on the last day, and because Stuttgart now has a stronger goal difference, a win today against FC Koln could help Ma

On a more positive side, it would take a miracle for Stuttgart to slide into the bottom two, as they are three points ahead of Arminia Bielefeld, who have a seven-goal goal difference. However, Die Schwaben will face a difficult assignment in defeating FC Koln, as the visitors had won four consecutive Bundesliga games prior to the 0-1 home setback to Wolfsburg seven days ago.

FC Koln’s push for UEFA Europa League participation has been severely hampered by their defeat to The Wolves, as they are currently two points below Union Berlin in sixth place. Because Union has a home match against Bochum on the last day, it’s difficult to assume FC Koln will finish in the top six.

With a win here and Borussia Dortmund’s victory over Hertha Berlin at Signal-Iduna-Park, Stuttgart has a realistic opportunity to avoid the relegation playoffs. On the last day of the season, we always like to back the highly motivated teams, and backing Stuttgart to win at 2.15 odds has to be the way to go here. 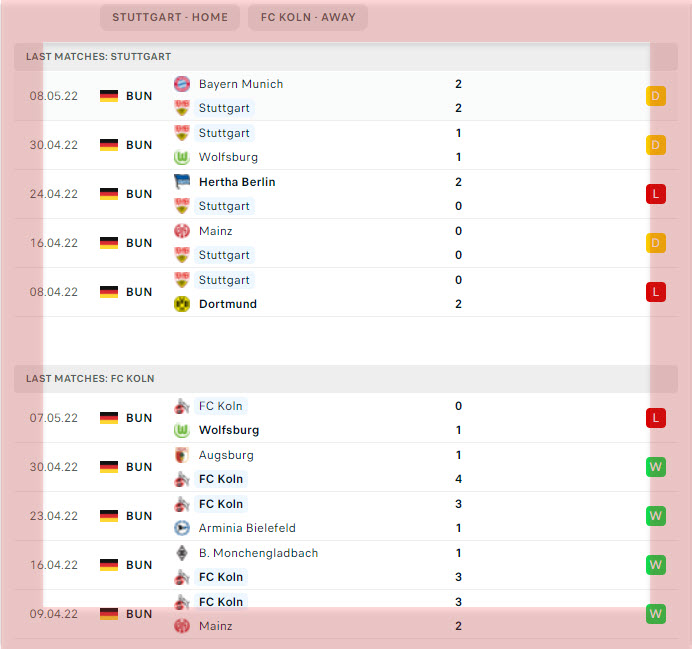