Due to their disappointing outcomes in the matches, they played over the weekend in their respective domestic competitions, neither club will start the game with high spirits.

Sturm Graz failed to break the deadlock in a disappointing goalless draw at home to Hartberg on Saturday.

With just one loss in the first seven games of the new season, the hosts are still third in the Bundesliga standings.

Christian Ilzer, the team’s head coach, can be especially pleased with his team’s defensive efforts considering that Sturm Graz has only allowed five goals in seven league games so far.

Against Midtjylland, who is not playing any defence at all to start the season, the Austrians should have enough room to produce at the other end of the field.

The Danish team is currently in the eighth round of the new Superligaen season with a goal differential of 15–15.

So far this season, they have only succeeded in winning two of these eight games. Midtjylland’s most recent failure occurred on Sunday when they fell 0-2 to AaB at home.

As a result, Midtjylland has now lost at least two goals in six of its last seven games across all leagues.

With just two points from six games against teams like Monaco, PSV Eindhoven, and Real Sociedad, Sturm Graz ended Group B at the bottom of the standings in the previous Europa League season.

There has only ever been one encounter between these two squads, and Midtjylland earned a 0-2 victory in a preseason friendly seven years prior.

At this stage in the season, Midtjylland is a long way from being at their peak. It is sufficient that they have won just two of their eight league games.

We will thus support Sturm Graz to win at the odds of 2.60 because the home court advantage could play a significant factor tomorrow.

We particularly like the 2.37 odds offered for the Austrians to defeat the porous Midtjylland defence here by scoring two or more goals. 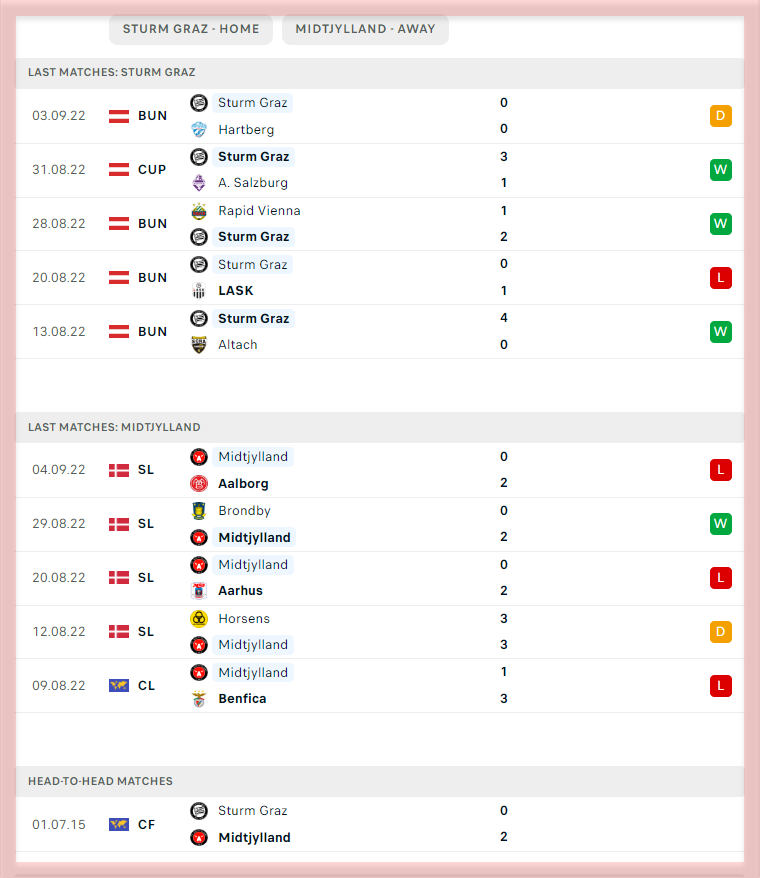