Stromsgodset vs Valerenga – Preview, and Prediction

Stromsgodset vs Valerenga – In recent contests, Stromsgodset has performed admirably. With seven games under their belt, the club has three victories, one tie, and three losses.

Their recent results reveal that they have gone undefeated in their previous three games, which has helped them climb the standings and secure a spot in the top half.

With ten points, the squad is currently in fifth place in the league rankings. Stromsgodset’s last game was against Kristiansund.

Valerenga has provided the team mixed results. The team has three wins, one tie, and three losses from seven games played.

The team has gone winless in their last two games and is hoping to end that streak. With ten points from their matches, the team is now ranked sixth in the league table.

Valerenga’s most recent encounter was against HamKam. Both clubs scored one goal apiece, and the game ended in a 1-1 FT draw.

Valerenga won the last h2h match with a 3-0 FT result. In the last six head-to-head meetings, Stromsgodset has failed to win.

Stromsgodset and Valerenga have won four of the last twelve head-to-head meetings. Prediction for Stromsgodset versus Valerenga

Both Stromsgodset and Valerenga have similar points in their matches, and both teams will be looking to break the tie in this match. Both sides have also won three of their past seven games.

Stromsgodset has halted a two-match losing trend with a win in their most recent home match. The team also held a clean sheet during the game.

In their away matches, Valerenga has had similar results. They have won one away match and lost the other four.

Stromsgodset will look to maintain their unblemished record. From the two teams, they have the best chance of winning.

The hosts have preserved clean sheets in their last three games and can be expected to do so again in this one.

Stromsgodset vs Valerenga – Head To Head 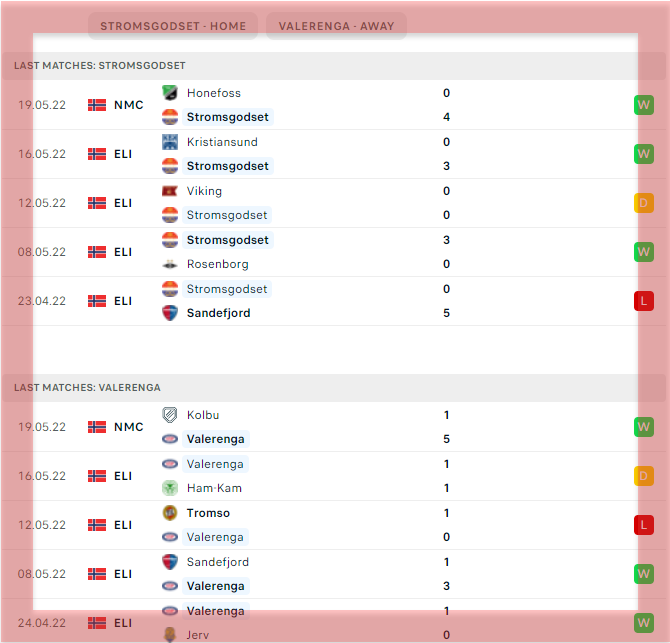