No one can accuse Stoke City manager Michael O’Neill of being hesitant to demonstrate a brutal streak at the bet365 Stadium, given the number of changes he made to his squad in January.

There can be no complaints with six defeats in ten Championship games, and O’Neill will be hoping that a number of new faces will revive a playoff drive.

The Potters were formerly among the top six teams in the league, but they are now in 14th place, with only two games remaining against several of their rivals.

On the positive side, Stoke City advanced to the fifth round of the FA Cup on Saturday, thanks to goals from Josh Maja and Jacob Brown in a 2-0 win over Wigan Athletic.

After finishing their own painful stretch with a 1-0 victory over second-placed Blackburn Rovers, Swansea should be in a similar frame of mind.

Prior to that match, the Welsh team had lost six of their previous nine games, but Michael Obafemi’s early goal proved to make the difference.

Despite the fact that Russell Martin is still under pressure to keep his job, Swansea can rise into the top half of the table if they use their games in hand.

After being cup-tied at the weekend, Lewis Baker and Jaden Philogene-Bidace are expected to return to the Stoke starting lineup.

Nick Powell might replace Mario Vrancic in the midfield, while Maja could start in attack ahead of Steven Fletcher.

Brown has scored in each of his last two games, so the newcomer may have to wait his turn.

Martin may opt for a more conservative approach on away territory after Swansea’s all-out onslaught against Blackburn.

In place of the suspended Ryan Manning, Ryan Bennett should return, with one of Jay Fulton or Korey Smith getting the nod over one of the offensive players. 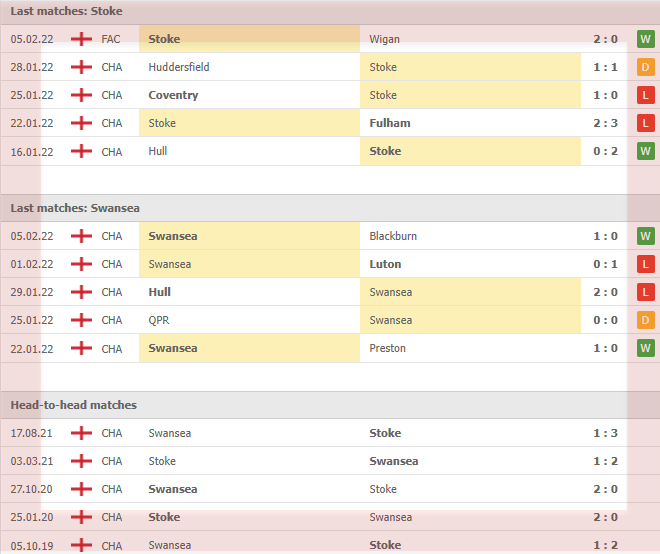 After being cup-tied at the weekend, Lewis Baker and Jaden Philogene-Bidace are expected to return to the Stoke starting lineup.

Both clubs are in a position in the standings where they can go all out in order to get all three points. However, neither team has been reliable this season, so we’re betting for a low-scoring draw in the Potteries.