Stoke City vs Luton Town – After suffering a defeat to Reading by a score of 2-1 in their most recent Championship match, Stoke City will be looking to get back on track with a victory today.

During that match, Stoke City had a 60% possession rate and 11 shots on goal, with only three of those shots hitting the target. Ben Wilmot scored the goal for Stoke City on the forty-minute mark. Reading,

who were their rivals, had 11 shots on goal, of which just three were on target. Reading’s goals were scored by Lucas Joo in the 2nd and 57th minutes.

In the most recent matches, it’s been an extremely unusual occurrence for Stoke City to play without giving up a goal. The fact of the matter is that Stoke City have been unable to keep their opponents from scoring in 5 of their most recent 6 matches,

allowing 9 goals to be scored against them as a result. Prior to this matchup, Stoke City had not won any of their previous three league matches in their own stadium.

Luton Town and its supporters will be hoping for a different outcome this time around after suffering a loss in their most recent Championship match against Wigan Athletic.

During that match, Luton Town had 49% possession of the ball and 13 shots on goal, with only 4 of those shots being on target. Carlton Morris scored a goal for Luton Town in the 39th minute, while Tom Lockyer scored an own goal in the 80th minute.

Wigan Athletic, their rivals, had nine shots on goal, but only one of them was successful in hitting the target. Wigan Athletic got a goal from Thelo Aasgaard in the 88th minute.

Luton Town have allowed opponents to score in 5 of their previous 6 matches, for a total of 7 goals scored by rival teams in those contests. The statistics speak for themselves.

Luton Town has unquestionably struggled in the defensive department as of late. In any case, only the passage of time will reveal whether or not the pattern will continue in this game. Luton Town enters this encounter undefeated in their most recent two away league matches, which were both played before this one.

A glance at the results of their most recent head-to-head encounters, which date back to 10/12/2019, reveals that Stoke City has won 4 of these, while Luton Town has won 1, and the number of games that ended in a tie is 1.

Due to the fact that Stoke City has a predominantly healthy team, Alex Neil, the club’s manager, has little to worry about in terms of availability and his primary concern is with the health of his players. The Cruciate Ligament Rupture will prevent Harry Souttar from competing.

The only health concern that the Luton Town manager, Nathan Jones, has to deal with in an otherwise available squad is one player’s lack of match fitness. Due to a knee injury, James Shea won’t be participating in today’s game. 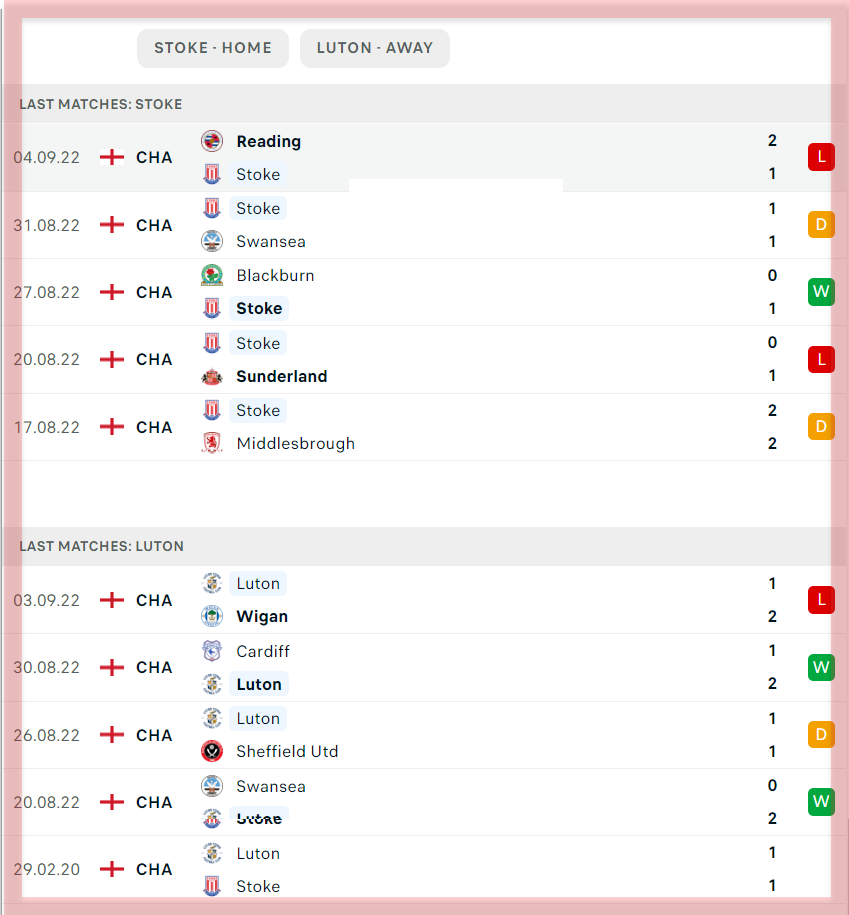