Stockport vs. Torquay Utd –  Stockport County hosts Torquay United on Wednesday night. They need at least a point to keep control of the National League title on the last day.

Even though their opponents are no longer in the running for the playoffs, the away team hasn’t lost in their last three games.

Before making the short trip to Wrexham on Sunday, Stockport knew that no matter what happened at the Racecourse Ground, they would still be in charge of the title race.

But the way they lost by 3-0 seemed to change the way things were going. Wrexham now has seven more goals than County and is at the top of the table because of that.

Dave Challinor’s team only needs four points from home games against Torquay and Halfiax Town, but they know they can’t lose for the fifth time in a row on Tuesday.

Challinor will be most worried about the fact that Stockport hasn’t scored more than once in any of their last six games. This comes after they scored five goals against Southend United in a single game.

Stockport has also gone five games without scoring a first-half goal from open play. This may need to change in the next week if this team wants to relieve some of the pressure that is building up.

From Torquay’s point of view, this is a chance to finish the season on a high note and keep up their good play since the beginning of February.
From 17 games, a total of 31 points have been earned. Halifax and Grimsby Town were the only places where they lost during this time.

Gary Johnson’s team didn’t make the playoffs because they only won one of their last five games, but there is a lot of hope for next season.
The Gulls are coming into this game after taking four points from Dagenham & Redbridge and Chesterfield in their last two games. In both of those games, they kept a clean sheet. 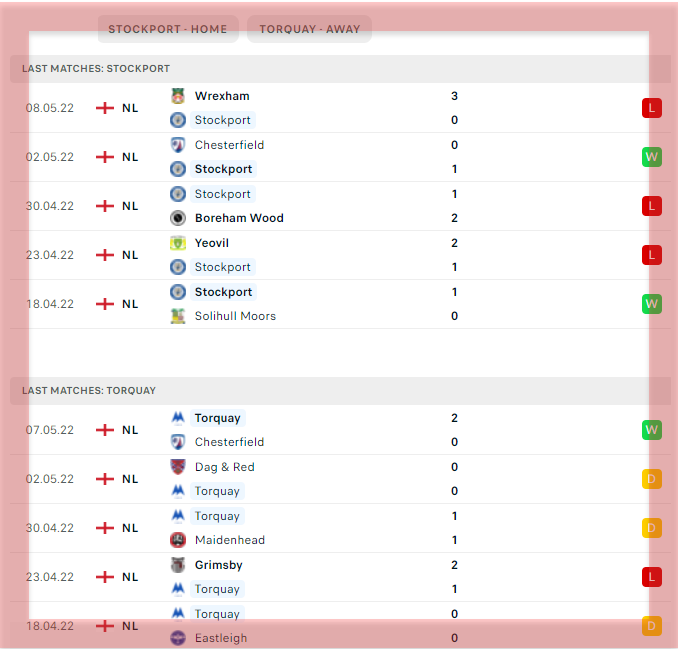