Antoni Sarcevic was the lone scorer for Stockport County (33′). Northampton Town received a goal via Jack Sowerby (68′ own goal).

The Stockport County backline can’t do much more, according to their most recent results. A total of three goals have been scored in the past six games for Stockport County, indicating that they have maintained a close game. Whatever the case, we’ll just have to wait and see if that tendency holds in this game.

Bradford City and AFC Wimbledon drew 0-0 in their previous encounter, which was played in League Two.

Bradford City, led by Mark Hughes, have scored a total of five goals in their last six games, for an average of 0.83 goals per game.

When comparing their previous head-to-head matches, which date back to March 28, 2005, both clubs have shared the victories, with Stockport County winning two of them, Bradford City winning two, and two games ending in draws after 90 minutes.

Over the course of those games, they combined to score 17 goals, with 8 from the Hatters and 9 from the Bantams. On average, 2.83 goals have been scored per game.

Due to the entirely healthy set of players available to pick from, Stockport County manager Dave Challinor has no real concerns over his players’ fitness going into this game.

Only one player’s fitness is a concern for Bradford City manager Mark Hughes out of a bunch of generally healthy players. Jamie Walker won’t be participating because of a knee injury.

According to our analysis, Bradford City might find it difficult to get past Stockport County’s defense, who we believe should be able to score their own goal in a successful performance.

Checking on the latest odds for this match in the 90-minute result market, a victory for Stockport County can be had for 1.78, going for a draw is 3.64, and staking on a win for Bradford City can be had at 4.72. These are the most competitive bets offered as of now. 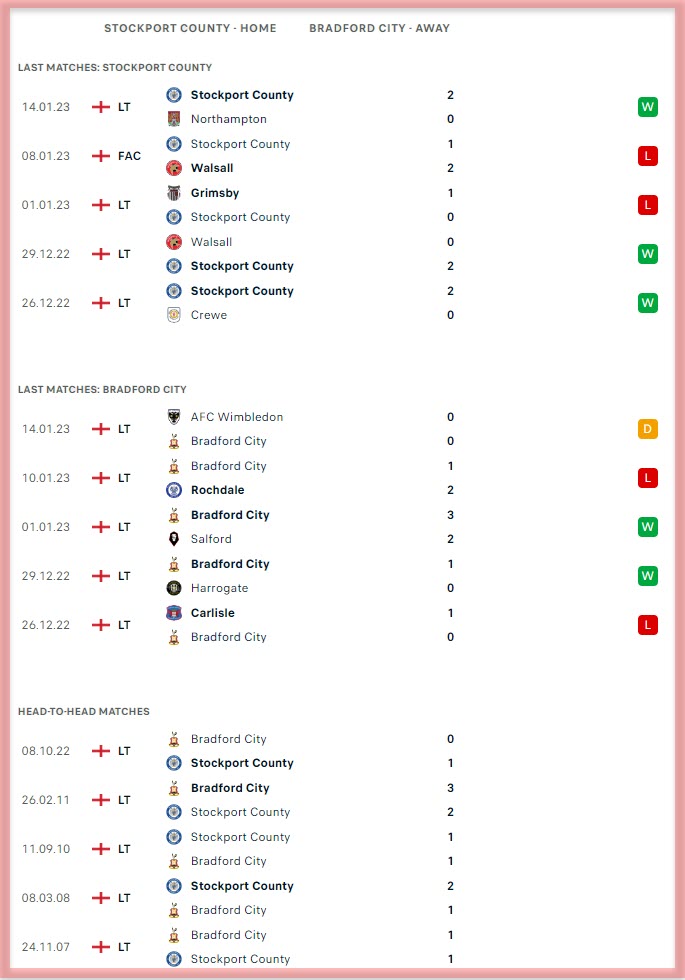