Stevenage vs Harrogate – Preview, and Prediction

Stevenage vs Harrogate – Harrogate’s losing streak is still going strong as they have dropped four of their last five league games. They will now go to Broadhall Way to face Stevenage, who have had a strong start to the season.

The host team lost to rival Bradford City for the second time this season after two straight victories. Also keep in mind that they have won three of their previous five games. The visitors, on the other hand, have lost four of their last five games. Most recently, they held Stockport by settling for a scoreless draw. They are now listed on the table in the eighteenth position.

Manager Simon Weaver will attempt to reverse the losing trend against this team after a five-game winless streak in League Two. However, given the host’s good health, it will be a very challenging task.

Steve Evans’ team has a 66% winning percentage. The fact that Boro have only drawn one game this season is interesting.

They can move up to the second spot on the standings if they can win this upcoming match. This season, the visitors have given up 1.22 goals per game on average. They have lost 55% of their league games as a result of this, among other things. They will therefore experience a challenging ninety minutes at Broadhall Way.

According to 7.00 odds, we forecast Stevenage will triumph by a score of 2-0. This is despite the fact that the visitors have never defeated Stevenage, and the most recent meeting concluded with a 3-0 victory for the home team.

The second prediction we’re making for this game is that Jamie Ried will score at any point, with a 2.50 odd. He scored two goals against Crewe Alexandra, bringing his season total to three goals in eight games.

Stevenage vs Harrogate – Head To Head 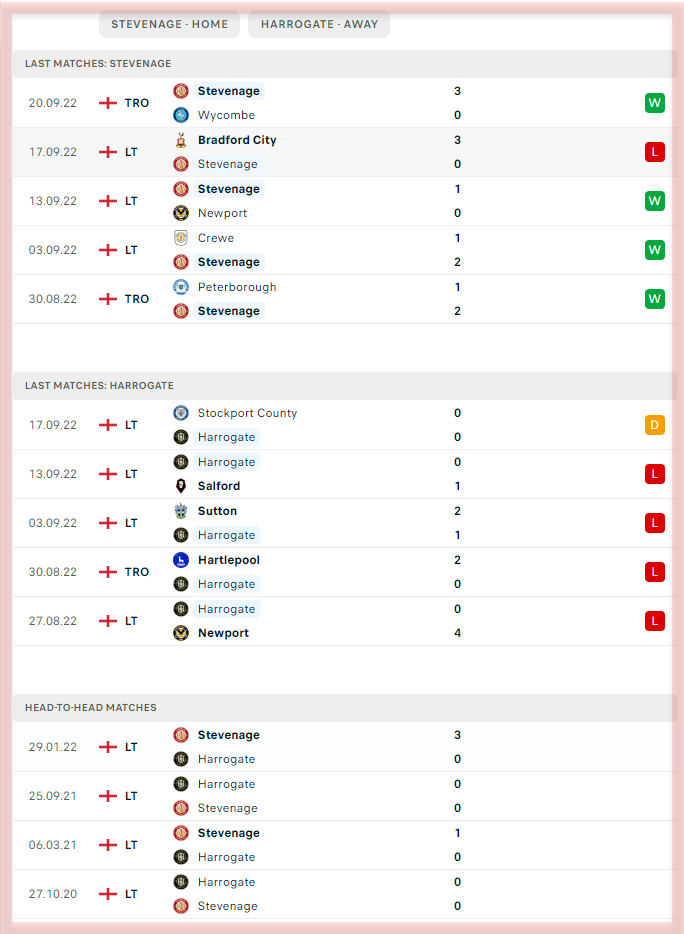