St. Gallen vs Lausanne-Sport – The Swiss Super League’s last round begins this Sunday, with mid-table St. Gallen hosting bottom-placed Lausanne. At Kybunpark, these two teams will battle it out.

With 47 points from 35 games, St. Gallen sits in fifth place in the standings. They won 13 games in the league, drew eight times, and lost 14 times.

The hosts have nothing to play for in this dead rubber encounter on Sunday since they are neither in contention for a European spot nor in danger of relegation.

In their last match against Grasshoppers, the home team suffered their third consecutive loss by a score of 2-3. St. Gallen scores goals, but they surrender nearly as many, resulting in a 64:63 goal ratio, indicating that defensive adjustments are needed.

Lausanne, on the other hand, is in the bottom tenth spot on the table, with only 22 points. They only won four of the 35 games they played, drawing ten times and losing 21 times.

They have already accepted their fate of relegation to the Challenge League as a result of their poor season performance.

Lausanne was defeated 1-2 by FC Sion in their most recent league match, their third defeat in the last five league games. They have the league’s poorest defense, having given up 72 goals in total, while their pitiful offensive side has only managed to score 37.

St. Gallen has won three of their last five head-to-head meetings, while Lausanne has won twice. The opposite match in January ended in a 5-1 victory for St. Gallen.

In four of their last five face-to-face meetings, they scored at least three goals. St. Gallen has won 25 points while being undefeated in 13 of their 17 home games this season.

They are expected to score here, as they have scored in each of their previous 18 games and have scored 9 goals in their last five.

Despite playing 17 games on the road, Lausanne has only won one away game this season. They have lost all of their last 11 away games in various competitions. Expect a home victory on Sunday, based on the current situation. 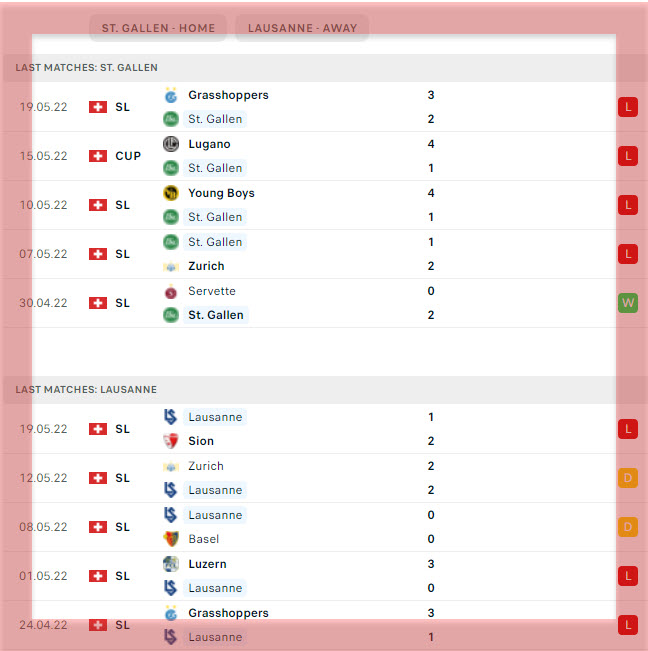