Sporting CP vs Eintracht Frankfurt – All eyes will be on Group D matches on Tuesday’s UEFA Champions League schedule since all four teams still have a chance to advance, despite the fact that there is absolutely no drama in the other three groups.

So, with seven points each, Sporting Lisbon and Eintracht Frankfurt are tied for second place in the group going into their matchup on the last day of the season.

However, the Portuguese team is in a far better situation. To advance to the competition’s knockout round, they must either win or draw on Tuesday night in front of the home crowd at Estadio Jose Alavade.

The campaign for Ruben Amorim’s guys in this group has been extremely unpredictable. The Portuguese heavyweights began out with two victories, but after losing back-to-back matches against Marseille (Marseille’s only two victories in the competition), they fell behind.

The following week, they travelled to London, but they overcame the trip with outstanding teamwork, holding Tottenham Hotspur to a 1-1 draw on English soil.

In contrast, Eintracht Frankfurt replaced Marseille in third position in the group standings after defeating the French team 2-1 six days prior. Last week, all three goals were scored in the first half of the match at Deutche Bank Park, with Daichi Kamada and Randal Kolo Muani scoring for the German team.

This will be Sporting Lisbon and Eintracht Frankfurt’s second head-to-head encounter. At the very beginning of 2017 Champions League season, the Portuguese club celebrated a crushing 0-3 triumph in the return match.

Due to the home fans and the exciting environment, we anticipate on Tuesday at Estadio Jose Alvalade, we will give Sporting Lisbon a little advantage.

Pedro Goncalves, the finest player for the hosts, will also be back in the lineup after serving a suspension in last week’s 1-1 draw against Spurs. At the 3.60 odds, we will wager on Sporting Lisbon to win and Over 2.5 goals in the final result.

Marcus Edwards to score anytime at the same 3.60 odds offers excellent value as the English forward has been in excellent form in recent games. 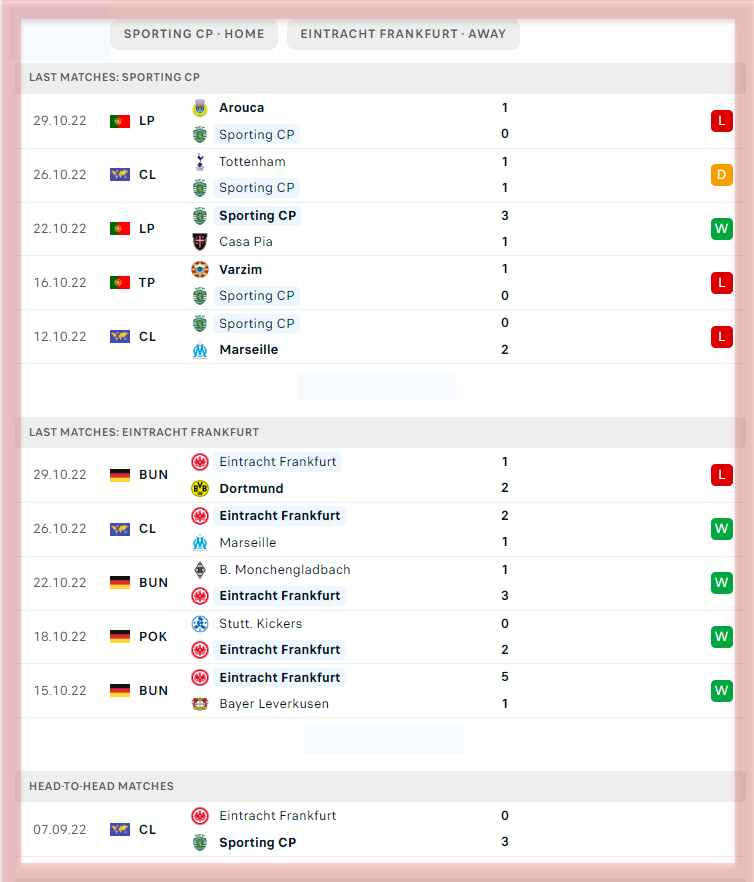