Sparta Rotterdam vs PEC Zwolle – Wednesday is a big Eredivisie game between Sparta Rotterdam and Zwolle. At Sparta Stadion Het Kasteel, two of the three worst teams in this league will play each other.

With 29 points from 32 games, Sparta Rotterdam is 16th in the standings. In the league, they won six games, tied 11 games, and lost 15 games. The home team needs 4 more points to get out of the relegation zone. They have won their last two Eredivisie games. They really need to work on their offense because they don’t seem to know how to finish.

After beating FC Groningen 2-1 in the Eredivisie, Sparta Rotterdam wants to do it again. This season, they haven’t scored in 13 of their last 32 games, and they are tied for the second-lowest and lowest-scoring teams in the whole league.

On the other hand, Zwolle is at the very bottom of the table, with only 27 points and the 18th spot. Out of the 32 games they played, they won seven, tied six, and lost 19 times. Their problems on the defensive end of the field have also been a big reason why they have given up 48 goals so far.

FC Zwolle‘s last league game was with FC Utrecht, and the score was 1-1. In 14 of their last 20 games, they didn’t score more than 2.5 goals. Because of their bad attack, they have only scored an average of 0.78 goals in Eredivisie games.

Sparta Rotterdam only won one of their last five league games against FC Zwolle. Three of the last five times they played, both teams scored. Last September, when the teams played each other, the score was 1-1.

As the end of the season draws near, both Sparta and Zwolle need a win more than anything. The visitors haven’t beaten the home team in the league in the last two games. Sparta Rotterdam has also won its last three league games at home.

Zwolle, on the other hand, has lost three of their last four away games, and they often lose points when they travel.
Since both teams are in danger of going down, the game is likely to be close, and a Draw no Bet for the home team seems like the best bet. 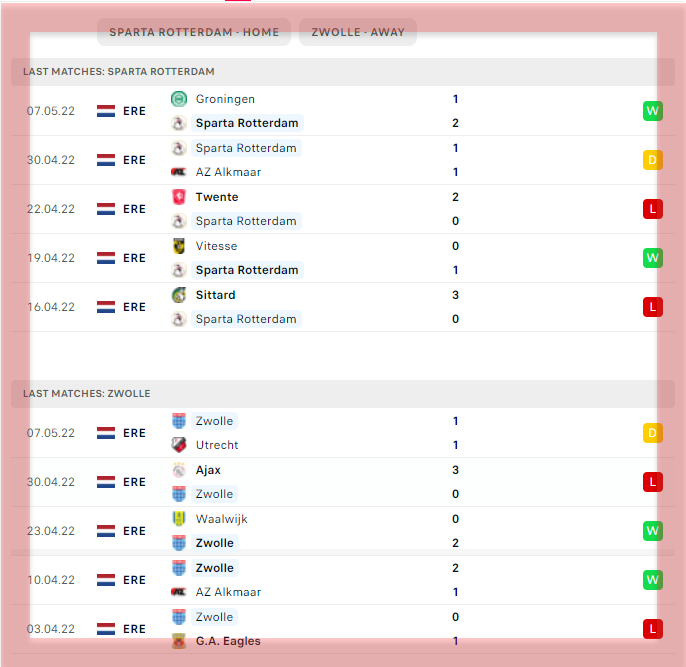