Spain vs Germany – Preview, and Prediction

Spain vs Germany -Germany are facing back-to-back group-phase eliminations at the World Cup. From what we have seen on the opening day as well as in the last couple of years, we have to fancy Luis Enrique’s Spain here.

La Furia Roja’s attack should have too much for the German leaky defense here and we will back Spain to win & Over 2.5 goals FT bet at the odds of 3.40. Those who like the anytime goalscorer market can make a Ferran Torres shout at the 3.25 odds after his brace against Costa Rica.

Hansi Flick’s men did not look great at all on Wednesday. They did have their chances to put the game out of Japan’s reach but Serge Gnabry Kai Havertz, Thomas Muller and company failed to convert them.

Die Mannschaft were brutally punished with two goals in quick succession at the death of the match, All eyes are on Leroy Sane and his potential recovery from injury.

However, even if Bayern Munich’s winger gets the nod here, we are worried about Germany’s back line in this clash against the Spaniards, Germany are vulnerable at the back and the red-hot Spaniards could easily exploit it to the max on Sunday.

Germany have been in crisis in the last several years and the German defense allowed too many chances against Japan, Spain play wonderful football under Luis Enrique

Not many experts listed Spain as the title contenders ahead of the World Cup in Qatar, Many have already changed their minds following La Furia Roja’s furious showing in the 7-0 drubbing of Costa Rica four days ago.

Indeed, when you look at their roster, it is not anymore the mighty Spain which conquered the planet with elite players like Iniesta, Xavi, Ramos, Torres, etc.

Nevertheless, this Spain is also full of talent all over the place, namely in midfield and on the wings, with several players each capable of hauling on any given day.

Luis Enrique knows how to get the most out of this unit. He took Spain to the semifinal at Euro 2020 as they were eliminated to latter champions Italy on penalties after a 1-1 draw in the regular time and the extra time.

La Furia Roja showed quality with the 1-0 victory over Sweden in the decisive World Cup qualifier on home soil as well. They certainly can go deep in Qatar and they are the favorites against this German side.

Germany are in trouble. They lost the opening round’s fixture to Japan and a potential defeat to Spain on Sunday would most likely eliminate them out of the tournament (if Japan get at least a point in the match against Costa Rica).

Spain vs Germany – Head to Head 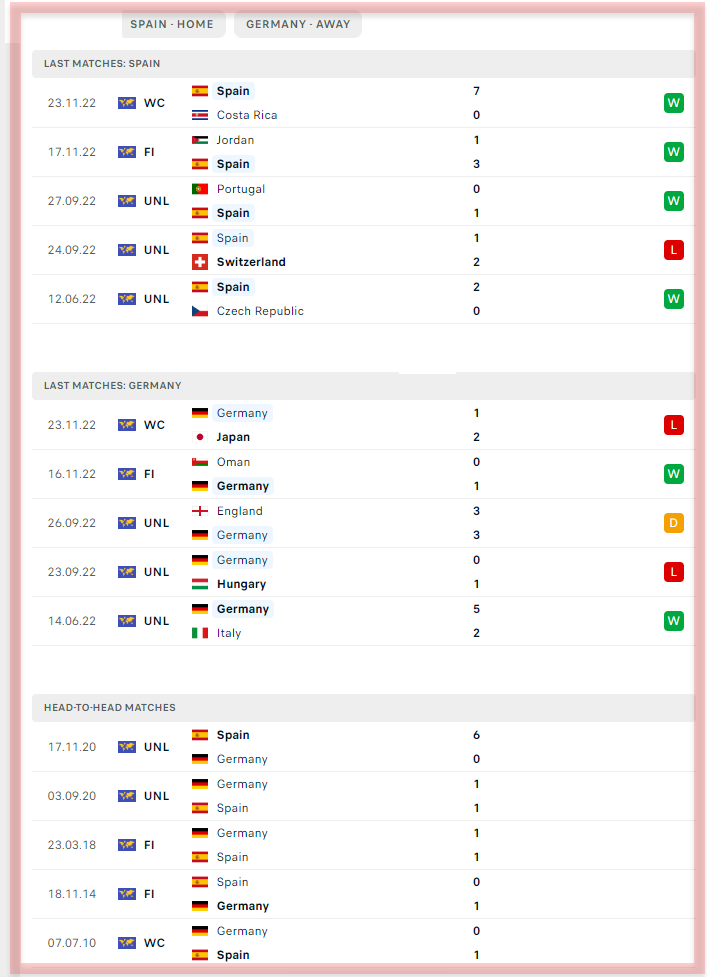