Slovakia vs Belarus – Preview, and Prediction

Slovakia vs Belarus – After losing to Kazakhstan 2-1 in the previous Nations League match, Slovakia will be looking to win again today. Slovakia had a 70% possession advantage and 5 of its 17 shots on goal were successful.

Mat Bero (51′) was the lone scorer for Slovakia. Three of Kazakhstan’s seven efforts at goal were successful. Elkhan Astanov (39′) and Yan Vorogovskiy (18′) scored goals for Kazakhstan.

In 5 of the previous 6 matches in which Slovakia played, there were fewer than three goals scored per game. In terms of goal distribution at that time, Slovakia managed to score five goals, compared to five for their opponents.

Belarus and their travelling supporters will be looking for a better outcome in this one after losing their previous match in Nations League action against Azerbaijan. Belarus enjoyed 47% of the possession in that game and made 13 efforts on goal, scoring on three of them.

Azerbaijan made 14 shots at goal at the other end, scoring three of them. Azerbaijan scored with Mahir Emreli (76′) and Ramil Eydayev (90′). A relatively small number of goals have been scored between Belarus and the opposition in 5 of their last 6 games.

The overall average amount of goals scored each game throughout that time is a pitiful 1.5, with Belarus averaging 0.83 goals per game. Naturally, this tendency won’t necessarily continue in that direction.

The Slovakian manager, Stefan Tarkovi, has no concerns about his players’ health going into this match because he has a totally healthy bunch to choose from. Heorhiy Kandratsyew, the Belarus manager, has no notable fitness worries going into this game because his team is fully injury-free.

Slovakia has the ability to control the ball for a significant portion of this game and take advantage of numerous scoring opportunities. At the same time, Belarus may find it difficult to penetrate their defence; but, we do anticipate them striking back at some point. Therefore, when everything is said and done, we predict a convincing 3-1 victory for Slovakia.

Slovakia vs Belarus – Head -to- Head 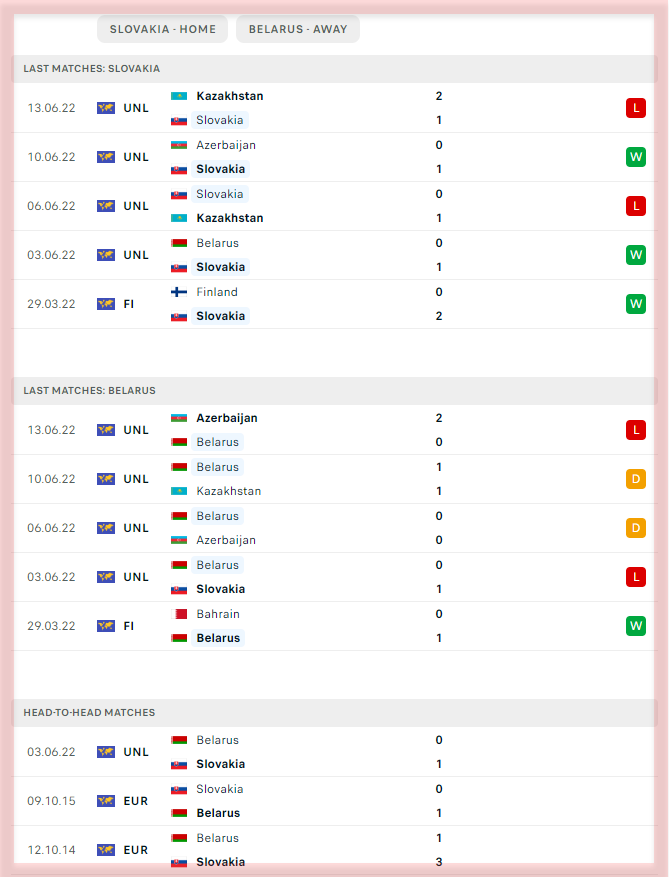