Sligo Rovers vs Shelbourne – Prior to experiencing a rough spell of form beginning in May, Sligo Rovers had a rather good start to the Irish top-flight season, earning 19 points from their first 12 games.

Following back-to-back victories and a draw with league-leading Shamrock Rovers, John Russell’s team managed just one point from their following four games, which caused them to fall swiftly in the standings.

However, they have recently found some form again, first ending that slump with a 2-1 victory at home against Derry City before following up a stalemate with University College Dublin with a 3-0 thumping of Finn Harps, with goals from Aidan Keena and Karl O’Sullivan.

Following that victory, the Bit O’Reds travelled to face eighth-placed Drogheda United last time, but they were forced to settle for a point as the game ended scoreless.

Russell’s team will aim to cut the gap to fourth-placed St Patrick’s Athletic, who are just three points ahead after having played one more game than Sligo Rovers, now that they have returned to the top half thanks to their improvement in form.

They welcome a Shelbourne team that has had a difficult recent run of games and is hoping for their own turnaround.

The visitors struggled in the lower half of the standings after a difficult start to the season, but they recovered well with four straight wins, starting with victories over the teams they faced on Friday, Drogheda United and St. Patrick’s Athletic.

Shels’ excellent ascent was continued with a 2-0 victory over University College Dublin, due to goals from Sean Boyd and Jack Moylan. However, their winning streak was abruptly ended by a 2-0 loss at Shamrock Rovers.

After that, Damien Duff’s team travelled to Bohemians, where they lost 1-0 as Dawson Devoy’s goal in the first half was the deciding factor.

After a scoreless draw against Dundalk at home, Shelbourne will be anxious to prevent their winless streak from extending when they travel there at the weekend.

Sligo Rovers’ recent home performance is respectable. In each of their last six home league games, they have gone undefeated. Four of them had two or more goals scored on their offensive side.

Shelbourne, on the other hand, are currently having a poor road record. They have dropped four of their last five road league games. Additionally, Sligo Rovers have a solid head-to-head record versus Shelbourne. In light of the aforementioned statistics, we thus support Sligo Rovers to secure a victory.

Sligo Rovers are currently on a roll, and with home field advantage, we expect them to keep it going with a slim victory. 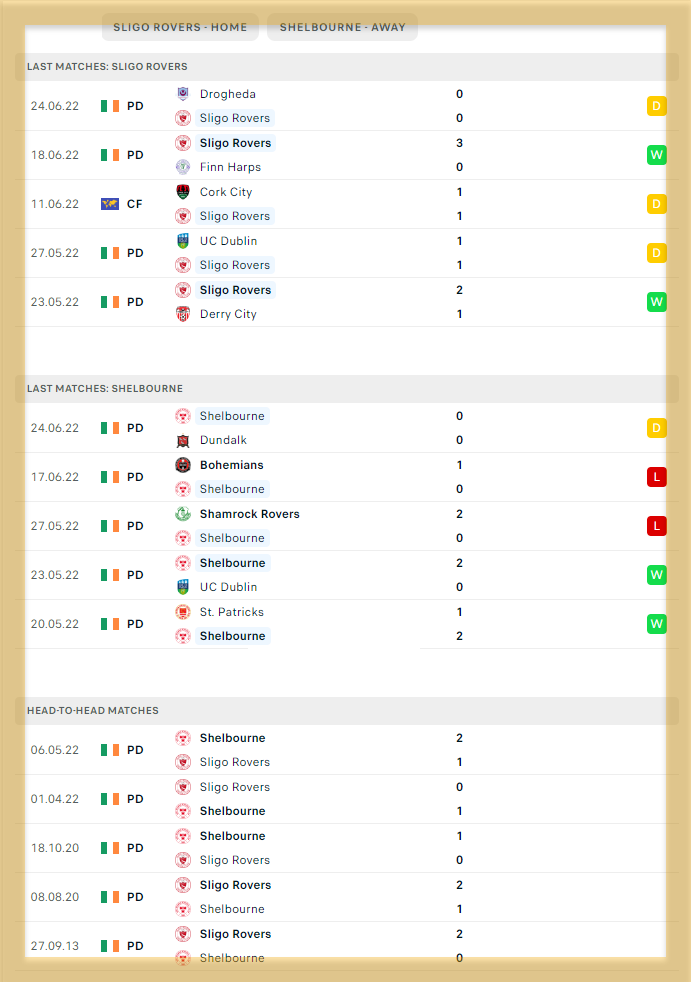