Although the Czech Women’s First League champions have failed to score in their opening two group games, they have competed well against tough opposition.

They began with a 1-0 defeat to Roma before they were beaten 2-0 by reigning German champions Wolfsburg in their most recent Champions League match.

With six points already separating them from the top two in Group B, they already have their work cut out to qualify for the knockout stages, especially as Wednesday’s game takes place at the Lokotrans Arena in Mlada Boleslav rather than their usual home ground.

While progressing from the group stage may prove difficult, Slavia Prague will want to continue their impressive form after winning their last three league games by a combined 14-1 scoreline.

Meanwhile, St Polten had to negotiate qualifying ties against Ljuboten, Dinamo-BGU Minsk and KuPS to book their place in the main draw.

After losing 4-0 to Wolfsburg in their group opener, St Polten looked set to record a victory over Roma when they took a two-goal lead thanks to a Jasmin Eder penalty and a Rita Schumacher strike.

While St Polten appeared to enjoy a comfortable lead, Roma scored four goals between the 75th and 87th minute to turn the game on its head, and although Maria Mikolajova reduced the deficit to one, the Italian side held firm to claim a 4-3 victory.

Since that defeat, the Austrian champions have won three straight games in all competitions, scoring 16 goals and only conceding once.

St Polten can also draw inspiration from the fact that they have won 14 of their 17 competitive games this season, while they have only failed to score in one match this term.

Slavia Prague could be without the services of Martina Surnovska, who has not featured since being forced off in the ninth minute of the Champions League defeat to Wolfsburg.

Denisa Tenkratova replaced Surnovska in the Wolfsburg defeat, and the 18-year-old could be presented with a starting opportunity on Wednesday.

After scoring three goals in her last two matches, Tereza Kozarova will be looking to help her side register their first goal of the group stage.

As for the visitors, they could keep faith with the same lineup that started against Roma despite giving up a two-goal lead in their 4-3 defeat.

Leonarda Balog will partner Jennifer bin central defence, while Julia Tabotta and Lainie Fuchs will operate as the two full-backs.

Melanie Brunnthaler will have the responsibility of leading the line for the visitors, and she will be aiming to score St Polten’s first goal of the group stage. 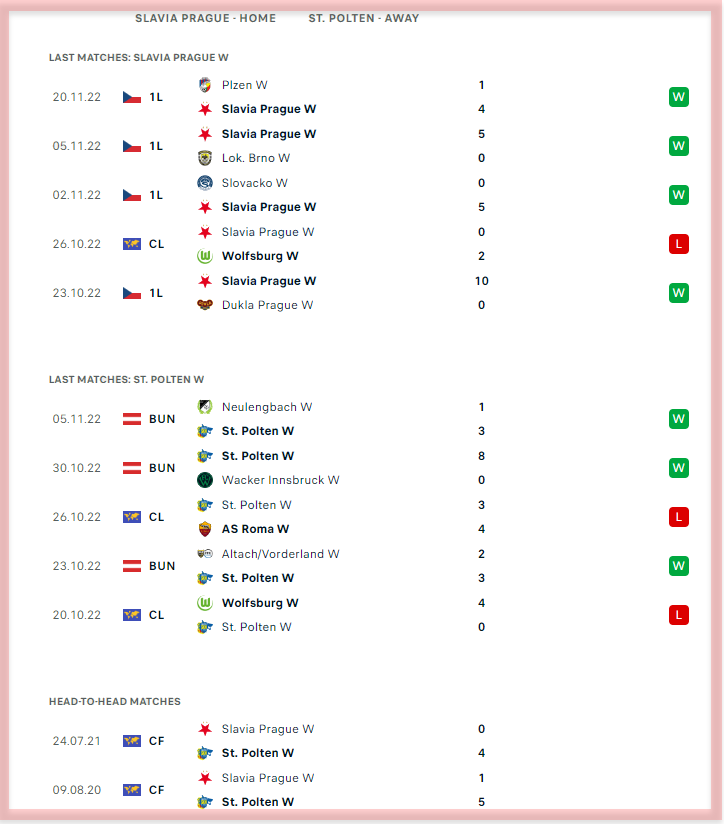