Slavia Prague vs Sivasspor -Slavia Prague kept their hopes of qualifying for the last 16 round of the UEFA Europa Conference League with a 0-1 victory over Ballkani seven days ago.

The Czech outfit thus bounced back from two separate losses to CFR Cluj in a double-header. Slavia are now three points shy of Group G leaders Sivasspor right ahead of the final day clash against them on Thursday evening at Fortuna Arena.

The maths is simple. A win here pushes Slavia Prague to the knockout round, while any other scenario sends the Turkish outfit through and likely knocks the Czechs out given CFR Cluj have a home fixture against Ballkani in the other game of the group.

Slavia Prague are huge 1.36 favorites for the win according to the bookies, but can they justify the tag on Thursday?

The team led by long-term manager Jindich Trpisovsky will come into this outing in the highest of spirits having won five matches on the spin across competitions. Slavia Prague additionally boosted their confidence with a 1-4 drubbing of Bohemians 1905 on the road on Sunday afternoon.

Sivasspor, on the other side, suffered another setback in the Turkish top flight on Monday, falling 0-2 at home to Antalyaspor. Riza Calimbay’s men failed to score a goal in two successive Super Lig games and are currently as low as 15th in the domestic league standings.

This will only be the second H2H meeting between Slavia Prague and Sivasspor. The first one was played in early-September and it saw the teams sharing spoils in a 1-1 stalemate on Turkish soil.

Slavia Prague have scored at least four goals in each of the previous three outings in the domestic competitions (two league games and one cup fixture). However, we just don’t like the value offered by the 1.36 odds for the home win pick here.

Instead, we will back Sivasspor to win in +1.5 Asian Handicap as the main betting option at the odds of 1.72. The alternative pick would be Under 0.5 goals in the first half at the odds of 3.25 since we expect the visitors to park the bus from the first whistle of the affair. 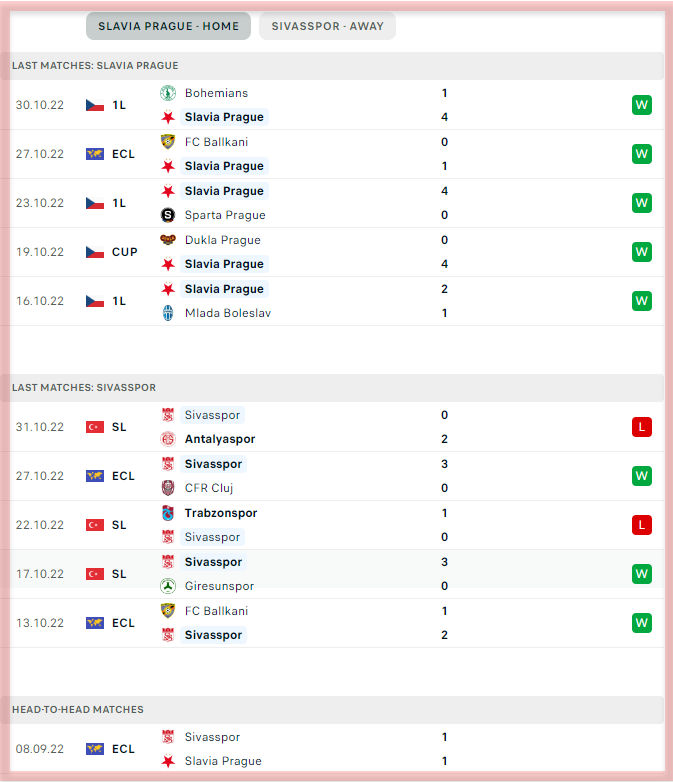