Sivasspor vs Kayserispor – Preview, and Predictions

Sivasspor vs Kayserispor – Throughout the season, Sivasspor has been average. It’s the final stage, where their form appears to be stable but yet fails to occupy a safe zone. They are currently 11 points behind and will not make it with only one game remaining.

In their most recent league match, Sivasspor defeated Rizespor 1-2 on the road. It was their fourth consecutive unbeaten run in the league. They’ll be trying to finish the season on a high note by taking advantage of home advantage.

Meanwhile, Kayserispor has had an erratic record from the start and has been able to sustain it consistently. They are located outside the top half of the table and have no impact on the standings of any teams within the safe zone. In their most recent league match, Kayserispor won 3-0 at home against Yeni Maltyaspor, who currently occupy the bottom slot. Prior to the aforementioned win, they had gone four straight games without a win in the league.

Sivasspor is also in mediocre form at home. They’ve won seven of their last ten league games at home. Their offensive side appears capable of scoring a handful of goals, but their defense appears to be lacking.

Kayserispor, on the other hand, has lost nine of its last ten league away games. Their offensive and defensive lines are both vulnerable on the road, so we shouldn’t expect them to deviate from the pattern they’ve established this season. Based on the above data, we believe Sivasspor will win because they are in better form. When these two teams meet in a Super Lig match on Saturday, we predict a high-scoring battle. 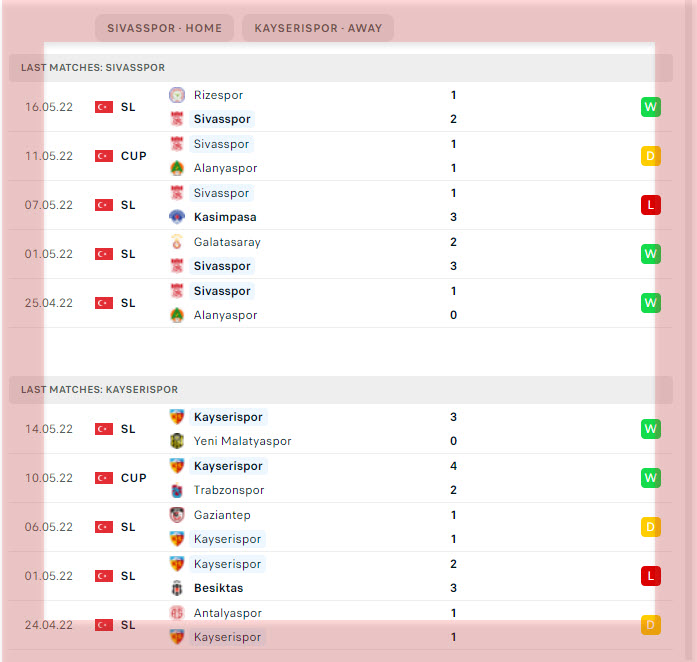