Sivasspor vs CFR Cluj – In retaliation for losing to Ballkani at home on matchday three, Sivasspor triumphed 2-1 in Kosovo to take the lead in Group G of the UEFA Europa Conference League (UECL) based on head-to-head points. The Turks need one more win to guarantee their advancement, and if Slavia Prague and Ballkani draw in their other encounter on matchday five, it would also guarantee first place.

Even though the first encounter with Ballkani was unexpected, having the home field advantage at the 27,532-seat Sivas Stadium would be vital. The fact that Sivasspor has never failed to score in a home UECL match (W1, D1, L3 – 90 min) is encouraging, but with goals being given up starting in the 60th minute of each loss, tensions may increase as time passes.

If Sivasspor falls behind in the last minutes, that will most likely be the outcome because Cluj only needs to win by two goals to secure qualifying in place of their hosts and build on their weekend derby success over Universitatea Cluj. The Romanian team is trying to make it to the European knockout round for the first time in three years. They have turned their fortunes around with a series of triumphs over Slavia, each coming after a 1-0 halftime lead.

Impressively, despite never scoring more than once, Cluj are remain unbeaten in away UECL matches this season (W1, D4), displaying excellent self-preservation. The fact that Cluj has only given up the opening goal in one of their nine competitive away games played since the beginning of August, as part of that streak also contributes to an even stronger trend, further demonstrates their defensive fortitude.

Players to keep an eye on: On matchday four, a late goal by Sivasspor forward Karol Angielski against Ballkani sealed the victory, while a week earlier, Rangelo Janga scored the winning goal in Cluj’s final away European match, making two of his previous three away goals important openers. 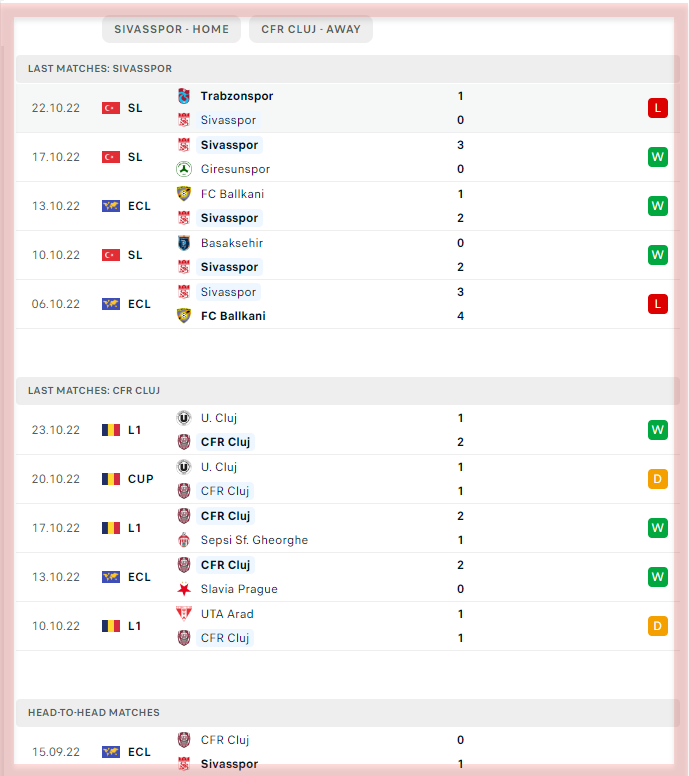