Sivasspor vs Alanyaspor – Preview and Prediction

Sivasspor vs Alanyaspor – In their matches this season, Sivasspor has been inconsistent. Their form can deteriorate at any time, causing the team to go through cold spells.

At the present, the team is on a three-match losing run. Because of this instability, the squad has remained in the bottom part of the league table. With 42 points, the squad is now ranked 13th in the league rankings.

Sivasspor’s most recent encounter was against Hatayspor. The match ended in a 1-1 draw after both teams scored one goal each.

Alanyaspor’s most recent Super Lig match was against Antalyaspor. Before Alanyaspor scored, Antalyaspor held a three-goal advantage in the game. Alanyaspor were unable to beat the opposition, and the match ended in a 1-3 FT loss for Alanyaspor.

With the loss in the most recent encounter, Alanyaspor has now lost two matches in a row. The team’s prior encounters have yielded a mixed bag of outcomes.

The team, on the other hand, had performed admirably throughout the season. Their efforts helped the squad to a sixth-place finish in the league standings, with 52 points.

Sivasspor vs Alanyaspor – Preview and Prediction

Sivasspor won the last h2h match with a 1-2 FT result, and in the last two head-to-head meetings, Sivasspor has won both.

Sivasspor has performed admirably on their home turf, winning only a few games. The club has four wins, one tie, and five losses in its previous ten home matches.

This season, Alanyaspor has performed admirably in road games. They have gone five games without losing until losing in their most recent road match. They’ve also scored over 1.5 goals in these games.

Alanyaspor has a better likelihood of winning than Sivasspor when compared to both teams. They can reclaim their form at any time and win the game.

In recent matches, both Sivasspor and Alanyaspor have scored and conceded goals. As a result, we may anticipate both teams scoring in this encounter. 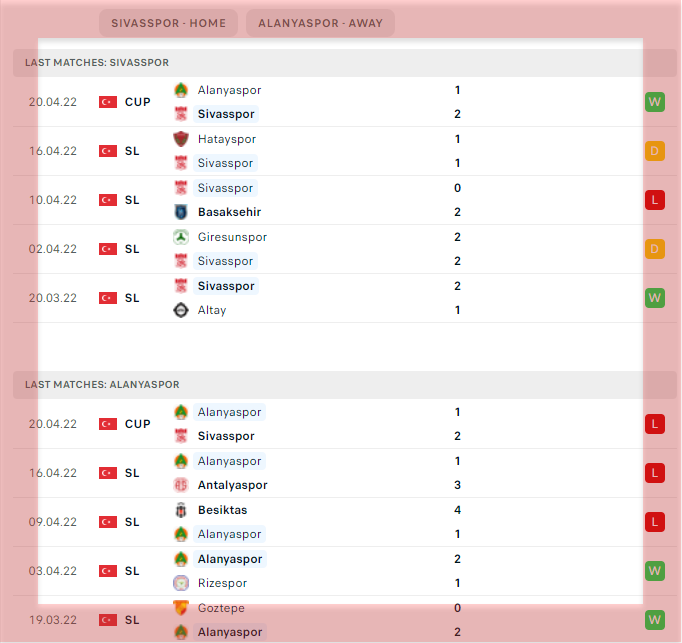