Shrewsbury vs Burton – Preview, and Prediction

Shrewsbury vs Burton – most-remote side To play Shrewsbury, Burton will travel to Greenhous Meadow. Both teams have had subpar on-field performances this season.

The visitors can be regarded as the league’s poorest team this year. They did, however, triumph in their league debut. The final score was 2-0 in favor of Exeter City. The team’s four-game losing record was broken with the aid of this victory.

On the other side, the home team recently lost 2-1 to Port Vale. Salop’s lone goal was scored within the opening 20 minutes of that game by Christian Saydee. Shrew manage’s three-game winning streak was snapped by this outcome.

It’s noteworthy that four different players have scored goals in the last two league games. Therefore, coach Steve Cotterill can count on the majority of his players to score goals.

In this forthcoming match, Steve Cotterill and his team will want to get back to winning ways. This is after taking into account that the visitors are seated at the bottom of the table. Furthermore, the host can move up to the seventh position on the table if they are able to win this game.

Burton has lost more than 77% of its games this season. They will therefore struggle in Greenhous Meadow. In addition, over the past three games, they have given up eight goals.

This season, Dino Maamria’s team has let up the most goals in League One. 2.44 goals are given up per game is the current figure. So, we may anticipate Salop winning. In their last three league games, they have managed to score six goals.

Our prediction is that Shrewsbury will win the game 2-1, with a 9.00 odd. This is after taking into account that the home team has won two of the last three games by a margin of two goals or more. They have also gone unbeaten in three of their last five league games. The second prediction we have for this game is “Both teams to score” with a 1.95 odd. Both sides have scored in three of the last six head-to-head games.

Shrewsbury vs Burton – Head To Head 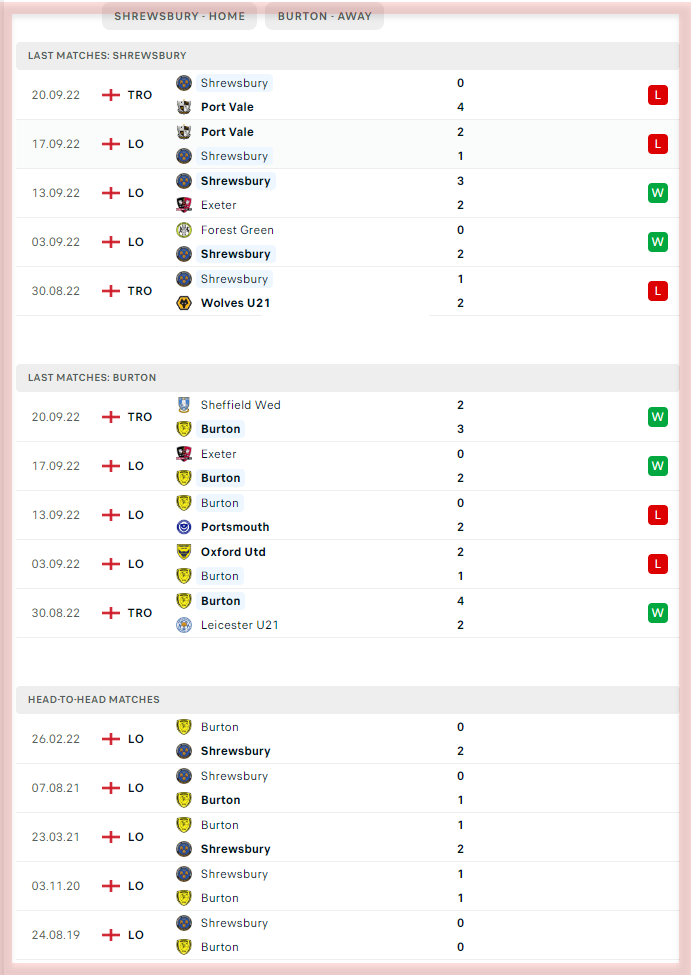