Shelbourne vs Drogheda – Preview, and Prediction

Shelbourne vs Drogheda – Selbourne’s last encounter was against Sligo Rovers. Shelbourne took the lead early in the first half and held it for the remainder of the game. The final score was 2-1 in overtime.

Shelbourne’s losing skid has come to an end with this victory. Prior to their victory over Sligo Rovers, the team had lost three consecutive games.

The team has two wins and three losses in its previous five games. With 15 points from their matches, the team is now ranked seventh in the league table.

This season, Drogheda United has struggled to win any of their games. The team has two wins, four ties, and four losses in its previous ten games.

Their dismal play has harmed the team’s standing, with them now sitting in the bottom half of the league table, just three points ahead of the relegation zone’s first team.

With 13 points from their matches, the steam is now ranked seventh in the league. The club is now winless in its last four games.

In their most recent match, Drogheda suffered a crushing defeat against St. Patrick’s Athletic. The match ended with an 0-4 FT score because Drogheda went goalless while the opposition scored four goals.

Shelbourne won the last meeting with a 0-2 FT score, and Shelbourne has won their last three games in a row.  Over 2.5 goals have been scored in three of the last five head-to-head matches.

In their most recent encounters, both Shelbourne and Drogheda have struggled to win. Shelbourne’s recent victory came after three straight defeats, while Drogheda had not won in their last four games.

Even Shelbourne’s home matches have failed to produce the desired outcomes. Only one of the team’s seven home matches has ended in a win, with the other five ending in a loss.

Drogheda’s performance in away matches has once again deteriorated. In their last two away games, the team has lost consecutively. Given both clubs’ current form, I feel the match will most likely conclude in a Shelbourne win or a draw. 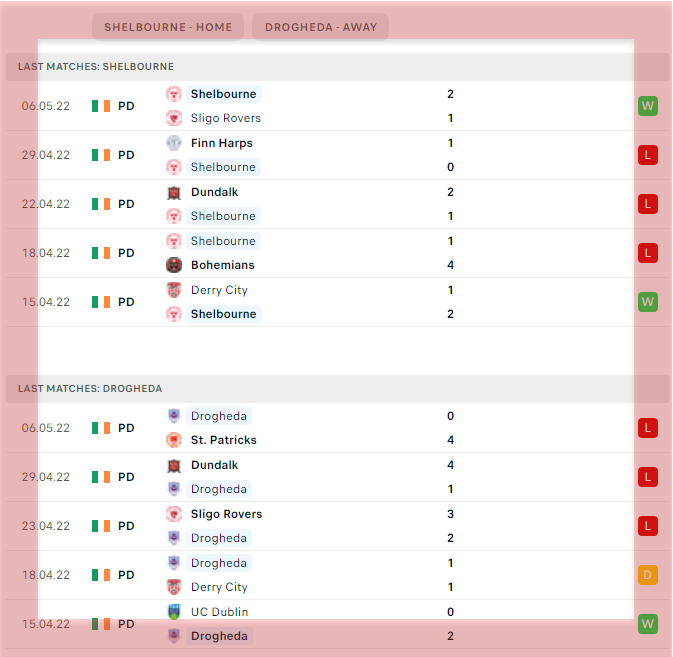