Sheffield United vs Rotherham United – After beating Hull City by a score of 0-2 in the Championship, Sheffield United is looking to add another success to their resume.

During that match, Sheffield United controlled 45 percent of the ball and had 12 shots on goal, with five of those shots hitting the target.

Oli McBurnie (20′) and Sander Berge (75′) were the players who found the back of the net for Sheffield United. Hull City, the team they were playing against, had 11 shots on goal, with only three of them hitting the target.

The excellence of the Sheffield United defense has been on display, as evidenced by their most recent results, which really do demonstrate the case.

The number of goals that have been scored near the end of the field by Sheffield United during their last six matches is   This indicates that they have been quite defensive.

Nevertheless, the continuation of this pattern into this game is not a given at all. In the run-up to this match, Sheffield United have:

have not suffered a defeat at the hands of Rotherham United in any of their previous three league contests. have a perfect record in their last six home league matches without suffering a loss.

The most recent match that Rotherham United participated in ended in a 1-1 draw with Watford in the Championship. During that match, Rotherham United had 34% possession of the ball and 8 shots on goal,

with only 3 of those shots hitting the target. Richard Wood scored a goal for Rotherham United in the second minute of play. At the opposite end of the field,

Watford had a total of 12 shots on goal, with only two of them being on target. Watford’s goal was scored by Vakoun Issouf Bayo in the 33rd minute.

Over the course of their previous six matches, the attacking players for Rotherham United have struggled to find the back of the net, resulting in an unsatisfactory return of only four goals.

During those encounters, The Millers have also been subjected to a total of six goals scored against them by their opponents.

Coming into this game, Rotherham United have played their last three league matches away from home and have not been victorious in any of those encounters.

When their most recent head-to-head encounters, which date back to 11/12/2004, are compared, it can be seen that Sheffield United has won three of these games,

while Rotherham United has won only one of these games, and there have been two draws. During the course of those matches, a total of 16 goals were scored between the two teams,

with The Blades contributing 9 of those goals and The Millers contributing 7 of their own. This equates to an average of 2.67 goals scored in each game.

The most recent league meeting between the two teams took place on match day 36 of the Championship on March 9, 2019,and ended with Sheffield United defeating Rotherham United by a score of 2-0.

At that time, Sheffield United managed to have 72% possession of the ball and 19 shots on goal, with 11 of those shots hitting their intended target. Jack O’Connell (5′) and Mark Duffy (74′) were the ones to find the back of the net.

Rotherham United had three shots on goal, but none of them were on target. Paul Heckingbottom, the manager of Sheffield United,

will be without the services of Jack O’Connell (Knee Surgery) and Jayden Bogle (Knee Problems), as both players are unable to play due to knee injuries.

Paul Warne, the manager of Rotherham United, does not have any fitness concerns to report in advance of this encounter because the team’s roster is entirely free of injuries and is available for selection. 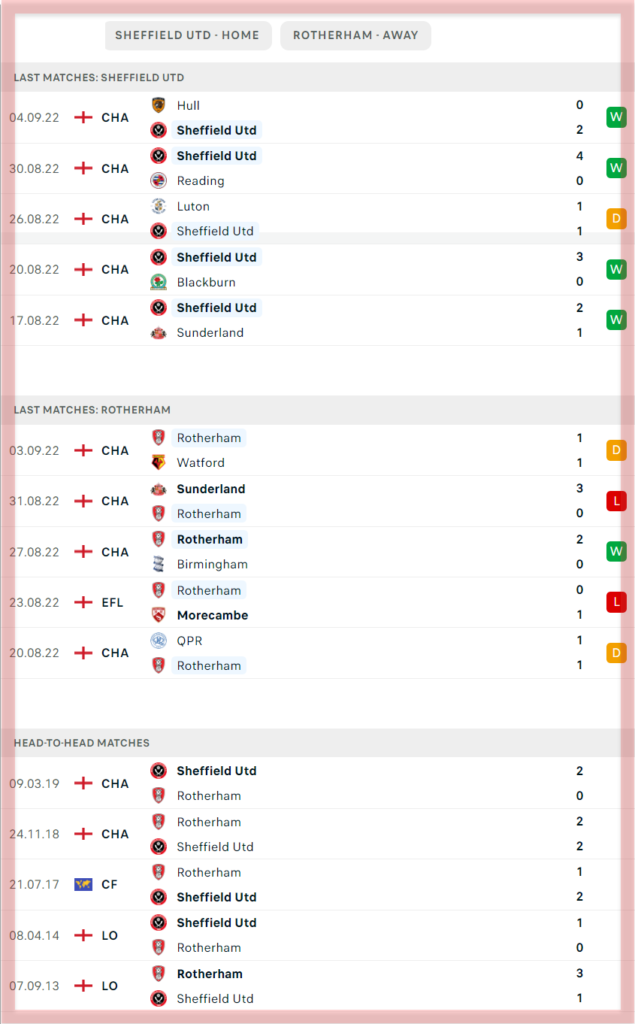