Shamrock Rovers vs Shkupi – Shamrock Rovers are determined to qualify for the Europa League at whatever cost. They’re in great shape, especially in front of their home crowd. Meanwhile, Shkupi has had a string of poor games and has conceded a large amount of goals.

They are now on a winless streak, and their defence has just been failing over this time. Most importantly, they have been terrible on the road recently, which adds to the burden.

They are the defending Macedonian top flight winners, although it should be noted that they are extremely inexperienced in European events like this.

Meanwhile, Rovers won the Irish league title in style the previous season. At the end of the season, they had a 16-point advantage at the top and had scored the most goals of any side in the tournament while allowing the fewest.

Furthermore, they have been on a dominant run at home for quite some time now, and they have found the back of the net frequently in these games.

This is the first time these two teams have met. Shamrock Rovers had gone unbeaten in 24 of their previous 27 total games, going on two consecutive 5-game winning runs and another 4-game winning streak.

It is also worth noting that they have been unbeaten at home since September, and with only four ties, they have a 100% winning record. Shkupi, on the other hand, had lost 10 of their previous 12 total matches and had conceded two or more goals in six of their previous eight games.

They’ve also only won three games away from home since January, and they’ve allowed two or more goals in each of their last four road trips. Taking these findings into account, Shamrock Rovers are expected to win this Thursday. 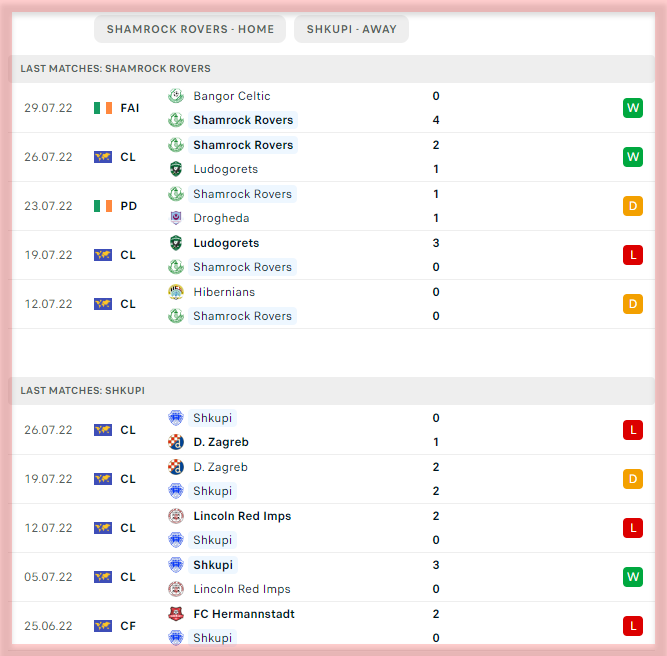