Shamrock Rovers vs Shelbourne – Shamrock Rovers will host Shelbourne in a League of Ireland Premier Division match at the Tallaght Stadium on Friday, looking to bounce back from their first loss in over two months. The hosts haven’t lost at home in any competition since August of last year, while the visitors have dropped two of their last three road games.

Shamrock Rovers’ 13-game unbeaten league run came to an end on Monday as they were defeated 1-0 away at Drogheda United. In the 37th minute, Ryan Brennan scored the game’s only goal, before Daniel Mandroiu received his second yellow card nine minutes later, adding salt to the visitors’ wounds. Despite that defeat, Shamrock’s nearest rivals Derry City also lost, their third in a row, giving Stephen Bradley’s side a seven-point lead at the top of the league halfway through the season.

Shamrock will now prepare for Friday’s match at the Tallaght Stadium, where they will be optimistic of getting back on track after going undefeated in their last 21 competitive home games. Shelbourne, on the other hand, has managed to pull 14 points ahead of the bottom two thanks to a four-game winning streak.

After victories over Sligo Rovers, Drogheda United, and St Patrick’s Athletic, the team won 2-0 at home against UCD on Monday. Sean Boyd scored his sixth goal of the season in first-half stoppage time, and Jack Moylan added a second just a minute later.

Damien Duff’s players will now have to maintain their good form in order to stay in contention for a top-three finish. At the midway point, they are seven points ahead of Dundalk in third place. Shelbourne’s chances of winning on Friday are slim, as they have lost six of their previous eight competitive games with Shamrock.

While Shelbourne has the momentum coming into Friday’s match, league leaders Shamrock are still the favourites to win in front of their home fans. Bradley’s team will be revved up to avenge Monday’s loss, and with nearly the entire squad available, they should have enough quality to beat the Reds. 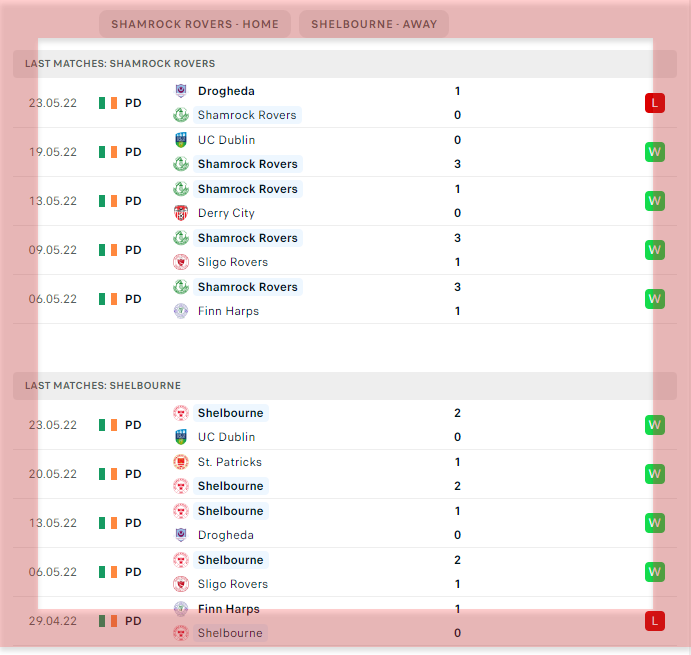