The game has little meaning for the hosts, who have already qualified for the UEFA Champions League next season.
Sevilla are three points ahead of Real Betis, but they have a stronger head-to-head record, thus they can’t finish lower than fifth.

With a win, Julen Lopetegui’s side can leapfrog Atletico Madrid into third place, since Atleti, who are only one point ahead of them in the league table, have a challenging match against Real Sociedad away in San Sebastian scheduled for Gameweek 38.

Sevilla, on the other hand, will be coming off four consecutive draws. The most recent came seven days ago, when Youssef En-late Nesyri’s equalizer at Estadio Wanda Metropolitano saved them from defeat.

Athletic Bilbao, on the other hand, is still in with a chance to qualify for Europe, as they are only one point behind Villarreal in seventh place.
Last Saturday, they defeated Osasuna 2-0 at home, with goals from Alejandro Berenguer and Asier Villalibre.

Nonetheless, Bilbao have won only one of their previous seven away games in all competitions, losing as many as five in the process.

In their previous four meetings, both clubs have won two games. Only two of the previous eight head-to-head meetings between these two teams have resulted in three or more goals.

In their past 28 visits to Estadio Ramon Sanchez Pizjuan, Athletic Bilbao has a terrible away record versus Sevilla, with only 4 victories and 16 defeats.

Athletic Bilbao has been suffering on the road recently. In all competitions, they have lost five of their last seven away games.
Because they are playing fourth-placed Sevilla (against whom they have a poor record at Estadio Ramon Sanchez Pizjuan), the home win appears to be a superb betting choice at 2.50 odds. 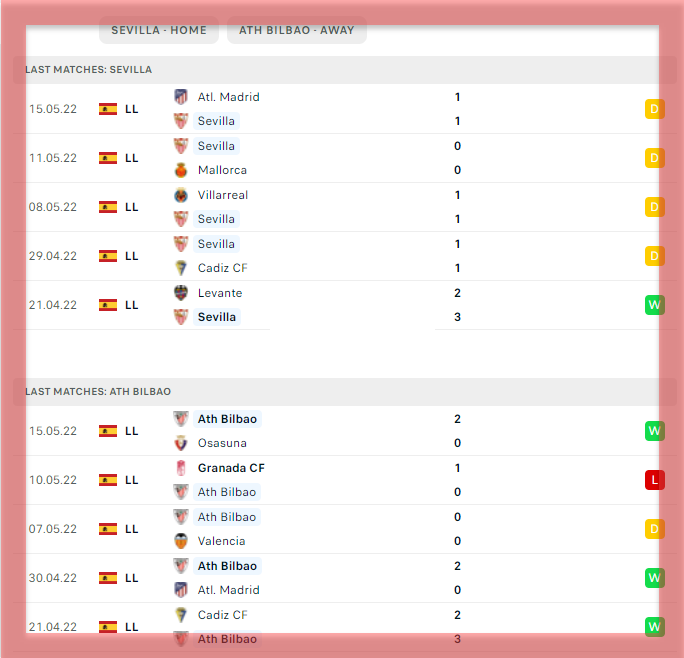