Servette FC vs FC Basel – Servette has struggled with their form in recent outings. In the last five games, the club has failed to win any of them, with three of them ending with no goals scored. With 42 points, the squad is currently in sixth place in the league. With their present standing, they have already guaranteed a spot in the Super League for the following season.

Servette’s last match was against Lugano. Both teams scored two goals in the encounter, which ended in a 2-2 FT draw.

This season, Basel has been one of the Super League’s main challengers. Throughout the season, they have 14 victories, 16 ties, and 16 defeats. Due to a small number of losses in matches, the club has climbed to second place with 58 points. The squad has qualified for the Europa Conference League qualification rounds based on their current standing.

Basel‘s last encounter was against Grasshopper Club. Both clubs scored one goal apiece, and the game ended in a 1-1 FT draw.

Basel won the previous meeting with a 2-0 FT score. Servette has not won in the last four head-to-head meetings.
Over 2.5 goals have been scored in four of the last five head-to-head matches.

Servette has struggled recently, having gone winless in their last five games. Basel, on the other hand, has only suffered a few defeats this season. However, they have drawn nearly as many games as they have won.

Servette is currently winless in its past three home games. They have lost two games in which they have failed to score. Basel has gone undefeated in their past five road games. The last two games, though, have resulted in 0-0 ties. 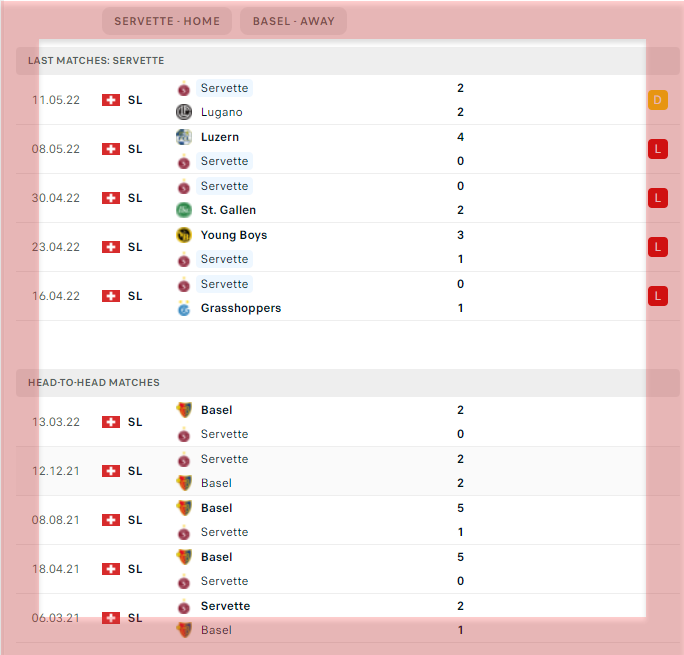