Seraing vs Club Brugge – Seraing, who defeated Sint-Eloois-Winkel 0-2 in the Belgian Cup, will be hoping for a repeat performance of their earlier victory. In recent years, Seraing have only occasionally been able to maintain their position for a full 90 minutes.

The truth is that Seraing have conceded 12 goals while failing to stop their opponents from scoring in six of their last six games. Seraing had lost their last eight home league games entering this encounter. It has been depressing.

Club Brugge will enter this match after defeating Cercle Brugge 4-0 in their previous matchup in the First Division A. Club Brugge had a 63% possession advantage and 4 of their 8 shots on goal were successful.

Andreas Skov Olsen (43′), Casper Nielsen (67′), and Roman Yaremchuk (82′) scored goals for Club Brugge. 13 shots on goal were made by Cercle Brugge, and 2 of them were successful. Cercle Brugge scored with an own goal from Harisson Marcelin (59′).

At least three goals have been scored in five of Club Brugge’s past six games. During that time period, 3.17 goals were scored on average each game, with 2.33 of those goals coming from Club Brugge. However, only time will tell if that trend will hold in this upcoming match.

Carl Hoefkens, the manager of Club Brugge, must deal with a number of absent players. Noa Lang, Tajon Buchanan, Clinton Mata, and Mats Rits are out due to injuries to their ankles, muscles, andcruciate ligaments, respectively.

Even though only one goal is probably all that Club Brugge will allow, we think Seraing will have enough opportunities to get past their defence. As a result, we anticipate a competitive game with a 1-2 Club Brugge lead after 90 minutes. 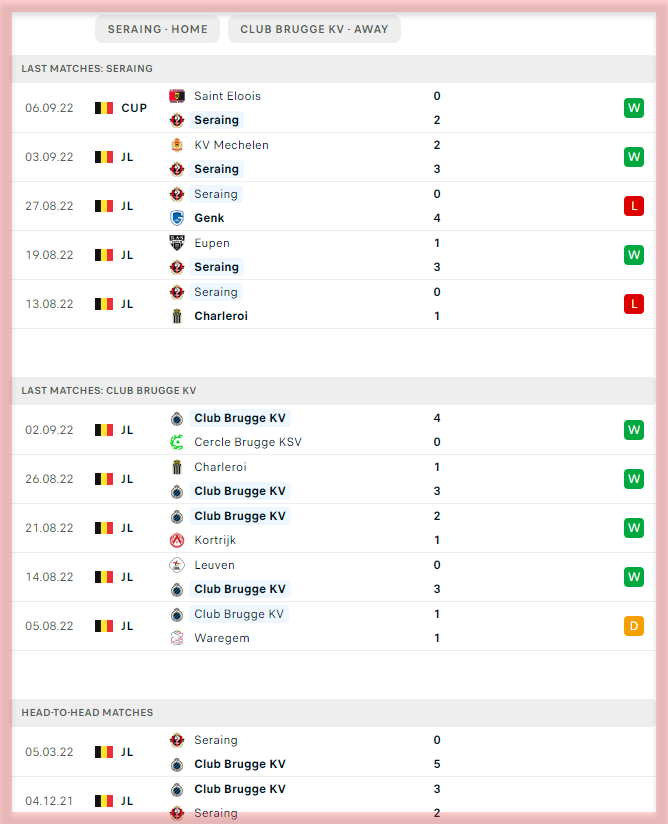