Seattle vs Dallas – Preview and Prediction

Seattle vs Dallas – On Tuesday, Dallas will travel to Seattle to take on the Sounders in an attempt to win their third consecutive game for the first time since November 2020.

The Sounders, coming off their third straight road loss, will be aiming to go back to winning ways and into the Western Conference playoff picture as soon as possible.

The Seattle Sounders’ MLS season came to a crashing halt on Saturday, when they lost 2-1 to Los Angeles FC in a match played at the Banc of California Stadium.

Following an early deficit caused by an own goal by Colombian defender Jesus Murillo, the home team responded swiftly with a goal from Kwadwo Opoku in the 35th minute. However, just two minutes before halftime, Carlos Vela scored to completely turn the game around.

Before that, on July 24, Brian Schmetzer’s squad ended a three-game losing trend with a come-from-behind 2-1 victory over the Colorado Rapids with to goals from Jordan Morris and Nicolas Lodeiro.

With 29 points after 22 games this season (9 wins, 2 ties, and 11 losses), the Seattle Sounders are currently ninth in the Western Conference, just two points behind the seventh-placed Portland Timbers and the final playoff position.

The Rave Green are certain that they can get back on track and secure the required results when they return to their home field, where they have won 13 games, lost 3, and drawn 4.

Dallas beat LA Galaxy 1-0 on Sunday to go 2-0-0 for the first time since April. Franco Jara scored the game’s only goal for the home club, which had less than 40% ball control. Greg Vanney’s team lost their 10th game.

On July 24, Dallas snapped a seven-game winless streak with a 1-0 victory away to Real Salt Lake, thanks to a goal by 21-year-old Jesus Ferreira in the 14th minute.

Nico Estevez’s squad is presently fourth in the Western Conference standings with 35 points after 23 games, tied with third-placed Minnesota United on points and 13 behind leaders Los Angeles FC.

Seattle vs Dallas – Head -to- Head 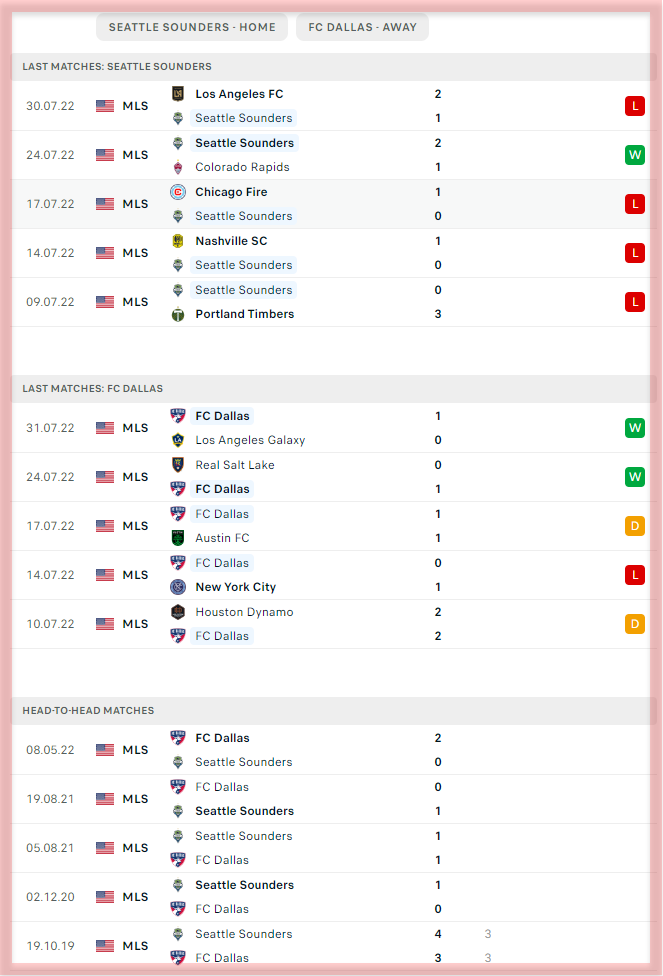