Scotland vs Ireland – Preview, and Prediction

Scotland vs Ireland – Scotland will hope to build on their previous performance, a 1-4 Nations League triumph against Armenia. In that encounter, Scotland had 70% of the possession and 7 of its 14 efforts on goal were successful.

Stuart Armstrong (14′, 45′), John McGinn (50′), and Ché Adams (54′) scored goals for Scotland. Armenia had 9 shots on goal with 4 of them being on target at the other end. For Armenia, Vahan Bichakhchyan scored after six seconds.

Recent games have seen few instances of Scotland not conceding. They will be concerned that Scotland’s defence has been breached in five of their last six games, resulting in the loss of 10 goals.

Ireland’s previous match against Ukraine in the Nations League ended in a 1-1 draw. Ireland owned 38% of the ball during that game and made 8 attempts on goal, scoring on three of them.

Nathan Collins (31′) was the Irish scorer. On the other hand, Ukraine made 9 goal attempts, scoring 3 of them. The goal for Ukraine was scored by Artem Dovbyk (47′).

In their last six games, Ireland under Stephen Kenny have had seven successful goal attempts. There have been five goals scored against them in those same confrontations.

We believe that Ireland might require a little bit of luck to score against this Scotland team, who we believe should ultimately score and possibly retain a clean sheet as well. Therefore, we predict that Scotland will win 1-0 after 90 minutes.

Scotland vs Ireland – Head -to- Head 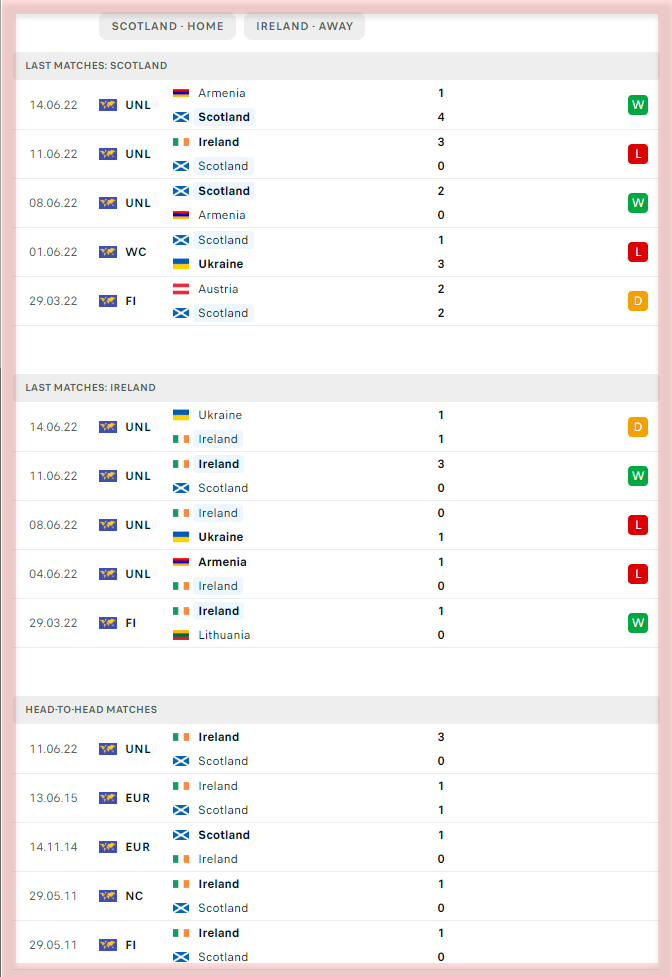