Sarmiento vs Racing – Preview, and Prediction

Sarmiento vs Racing –Sarmiento is currently in 12th place in the standings after collecting seven points from their first five league games.

They lost 2-0 on the road to open the season before winning 1-0 at home against Argentinos Jrs. However, they suffered a second loss of the year on the road against Estudiantes on matchday three.

Sarmiento defeated Patronato by a score of 3-1 upon returning to their home field, and last weekend they played out a scoreless draw with Platense to earn their first away point of the Primera season.

Their two home games have both ended in triumphs, but their three away games have only produced one point. On Sunday, they will be attempting to secure their third straight home victory.

A victory this weekend would also enable Sarmiento to overtake their rivals in the league standings, where there is now a two-point margin.

Racing Club is now seated in third place after accumulating nine points from their five league games, despite the fact that they may only be two points ahead of their rivals.

Emiliano Vecchio and Enzo Copetti’s goals gave Racing Club a two-goal advantage at the half of their home match against Aldosivi.

A third goal by Leonardo Sigali was added in the 55th minute, and then goals from Jonathan Gomez and an own goal by Rufino Lucero made it 5-0.

Racing Club will be attempting to get their first away points of the Primera season this weekend after dropping both of their away games thus far, despite their strong home record.

Sarmiento has won both of their first two home league games, and even though Racing Club now leads their opponents by two points, we believe they will take advantage of home advantage to win all three points on Sunday.

In three of their previous four games overall, Sarmiento was unbeaten, and two of them victories. Additionally, they had scored two goals or more in six of their previous nine home games and had won four of their previous six home games.
Racing Club has been conceding goals in a significant quantity lately and is currently on a brief losing skid on the road.

Despite their recent road woes, Racing Club has a great record against this adversary throughout the years and has consistently been among the top teams in the Argentine top division. 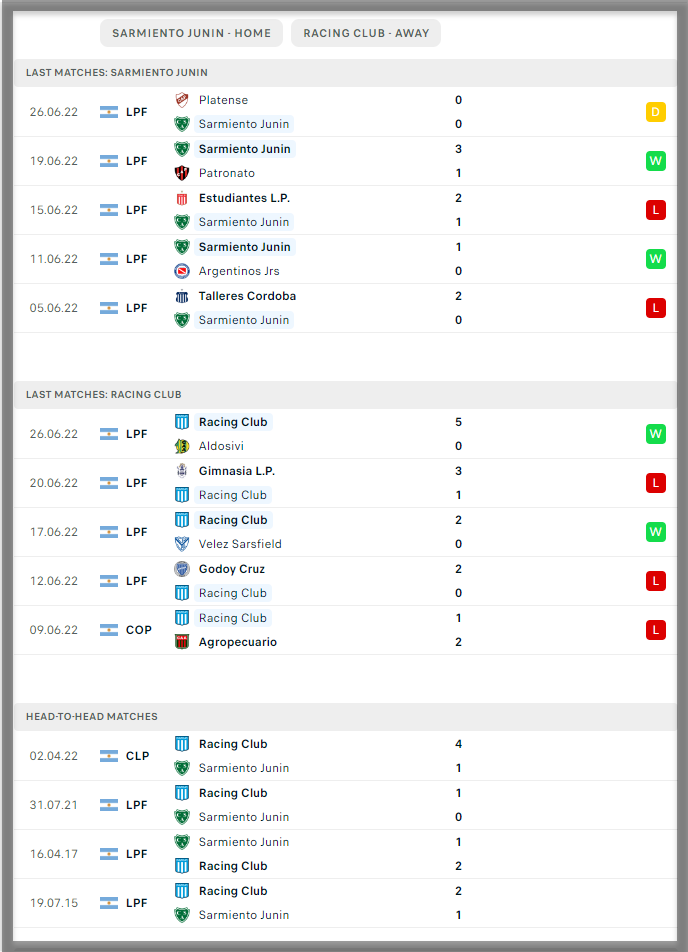