Sampdoria vs Fiorentina – Preview, and Prediction

Sampdoria vs Fiorentina – Fiorentina is clinging to the seventh spot in the rankings, which will allow them to compete in the Europa Conference League next season.

It’s also worth noting that they have a chance to finish in sixth place, earning them a spot in the Europa League for next season.

What’s more remarkable is that they have the same number of points as Roma in 6th place and Atlanta in 8th place.

As a result, the final two games will be extremely nerve-wracking for all three, and there’s a good chance we’ll witness some significant upsets.

The fact that Fiorentina is playing struggling Sampdoria, who are in the lowest tier of the table, assists them. They have dropped a lot of points recently, and they are also surrendering a lot of goals.

Furthermore, they have a dismal head-to-head record against this opponent over the years, so with all of these factors in mind, expect Fiorentina to eke out a much-needed win on Monday.

Sampdoria was defeated 2-0 by Lazio in their last match. They had also lost 15 of their previous 20 games overall, including a five-game losing streak.

Fiorentina, on the other hand, is full of confidence following a 2-0 victory over Roma, one of their main rivals for a top-six finish.

The club will now be focused on capitalising on this victory, and it is expected that this momentum will aid them much on Monday.

Taking these findings into account, as well as Fiorentia’s historical head-to-head supremacy, expect them to score three points. Throughout the season, Sampdoria has only won 9 times, and they have only kept two clean sheets in their last ten games.

In the last three months, Fiorentina has lost three league games. It should be mentioned, however, that one of these three losses came against AC Milan. 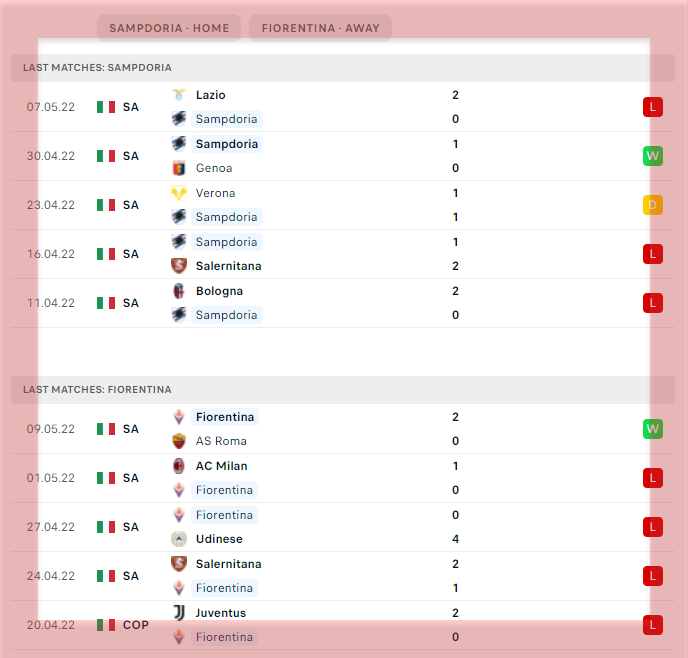