Sampdoria vs Fiorentina – Preview, and Prediction

Sampdoria vs Fiorentina –The 90th minute winner against Spezia last weekend at Stadio Alberto Picco gave Fiorentina their third victory of the year.

Substitute In a game where I Viola registered as much as 27 efforts, Arthur Cabral made the difference between the two teams on this particular occasion. In Game week No. 13 of the Italian Serie A, Vincenzo Italiano’s team will travel to Stadio Comunale Luigi Ferraris to take on Sampdoria on Sunday afternoon.

Le Samp is winless at home so far this year. In six league games played in their own backyard this season, they managed just two points.

The team managed by Serbian Dejan Stankovic was unable to change the outcome of the difficult 3-0 loss to Inter Milan eight days prior at Stadio Giuseppe Meazza. Sampdoria has the league’s worst attacking record with only 6 goals in 12 games this season.

Fiorentina does, however, have defensive problems. In the previous nine league games, they had had one clean sheet. On Sunday, it will be very intriguing to see if Le Samp can get through such a porous defence.

In the last 47 head-to-head matches, the teams had a combined 15 victories. Sampdoria, on the other hand, has a strong home record, with 12 victories, 7 draws, and only 4 losses in the previous 23 encounters with Fiorentina at Stadio Comunale Luigi Ferraris.

The Over 2.5 goals FT & Both Teams to Score option was placed on each of the last seven head-to-head contests between these rivals. There are only five points separating Sampdoria and Fiorentina in the bottom half of the rankings despite the fact that they have had a terrible start to the season.

The 1.90 price tag on the road is not justified by what I Viola have done. Due to the huge odds presented for the home victory option, we will attempt to profit from them in this situation. Sampdoria to win and Over 2.5 goals FT is available at 6.50 odds, while Sampdoria to win 2-1 is a wonderful value at 13.00 odds.

Sampdoria vs Fiorentina – Head -to- Head 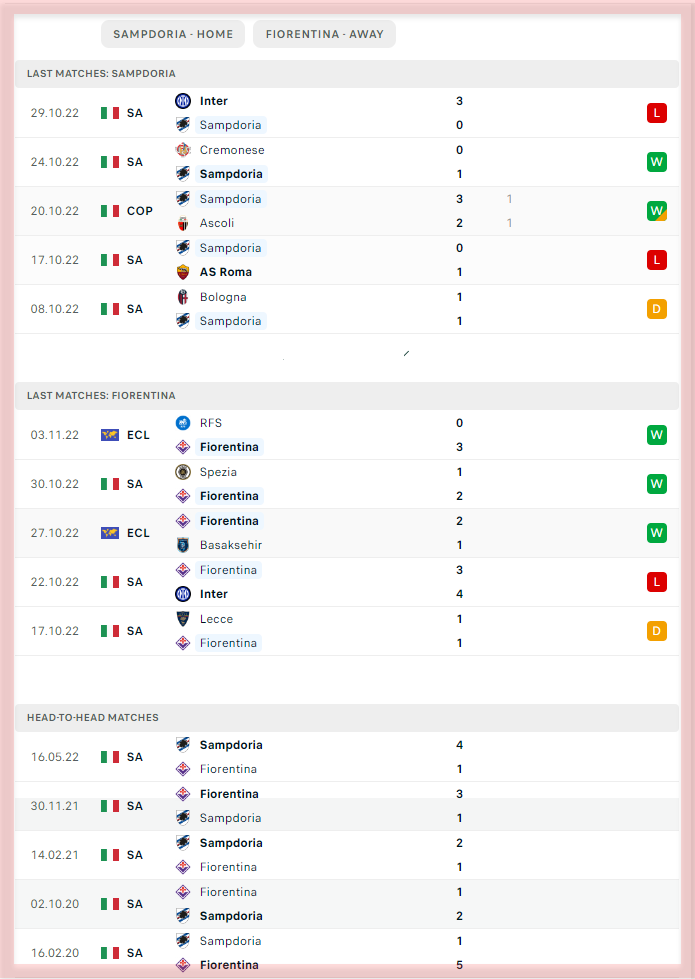